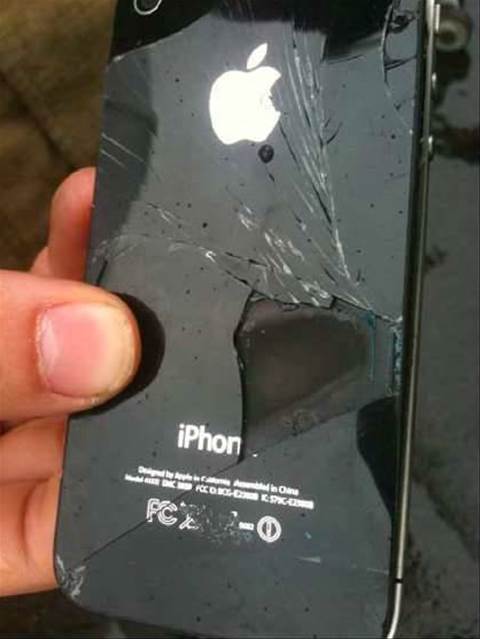 The combustion of an Apple iPhone 4 after a regional NSW flight last year was likely caused by a botched repair by an unauthorised servicer, according to a report into the matter.

According to the report, the handset started smoking after the plane had arrived at its destination. The smoke was extinguished by a cabin crew member.

The ATSB initially took the handset to its Canberra labs for analysis before sending it to the United States for further testing.

"The technical examinations found that a small metal screw had been misplaced in the battery bay of the mobile telephone; the screw puncturing the battery casing and causing an internal short circuit leading to heating and thermal runaway," the bureau found.

"It was probable that the screw had been misplaced during an earlier repair carried out on the telephone.

"That repair had not been conducted by an authorised service provider".

The ATSB said the owner had to replace the screen of the device six months after he bought it. He "could not recall" the name of the repairer, only that they were not authorised by Apple.

Preliminary x-rays of the device by the ATSB revealed "an isolated screw located in the battery section" - away from any place a screw would be required.

It appeared to be one of the screws on the base of the iPhone, next to the 30-pin connector, which was first thought to be "missing". It was later found after a CT scan performed at the US lab.

The inspection also revealed other repair issues, including other missing or incorrectly installed screws, a deformed metal clip near the battery and "disturbed" flexible cable adhesive on the main circuit board.

The ATSB said the incident highlighted the dangers of using unauthorised repairers.