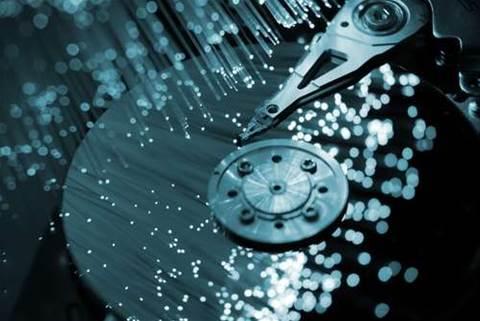 Researchers have demonstrated audio attacks that can be used to corrupt file systems on hard drives by vibrating the internal components in the storage devices.

University of Michigan and Zhejiang University reserchers described how the "Blue Note" [pdf] attack could use acoustic interference to cause hard drive heads and magnetic storage platters to vibrate, which in turn generates data corruption and operating system reboots.

Audio signals in the 5 kHz range were able to distort hard drive platters at 70dB strength on the devices, the experiments showed.

With inaudible ultrasound, the researchers were able to trick the shock sensor into retracting the read and write head on drives into parked position, which is done for protection against drops of storage devices.

In some cases, the researchers were able to co-opt the built in speakers in desktop and laptop computers for the audio attacks.

No special equipment is needed to generate the damaging sounds, they said.

According to the researchers the acoustic attacks pose a challenge for safety critical systems such as medical devices that often use electromagnetic drives.

Security video cameras with hard drives could also be taken out with audio attacks that prevent them from writing footage to the built-in storage devices.

That loud sounds can affect electromechanical storage devices has been known for a decade or more, the researchers said.

ING suffered a ten-hour service outage thanks to the test gone awry, and had to bring in an additional 70 staff to recover systems.

To mitigate against audio attacks, the researchers modelled a feedback controller that can be deployed via firmware updates to hard drives.