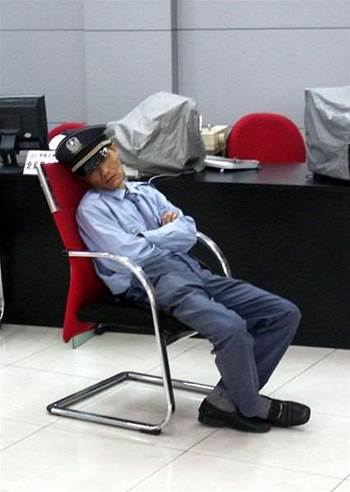 Two researchers demonstrated how they were able to push a malicious information-stealing app onto Google Play, even while Google's Bouncer custom malware scanner is watching.

They circumvented the Bouncer automated scanner with a JavaScript trick that transformed a benign Android app into a malicious one on Google Play.

Nicholas Percoco and Sean Schulte of Trustwave Spider Labs developed a benevolent app called “SMS Bloxer,” which looked like other SMS blocker apps on the market.

In order to ensure regular users didn't accidentally download the app, Trustwave also priced it at $49.95, in stark contrast to similar apps, which were usually $2 or less, or free.

SMS Bloxer lived on Google Play for two weeks and didn't get flagged by Bouncer for that entire period of time. At its worst, the app was capable of  stealing contacts, SMS messages, and photos.

It could harvest information about the device or force a web page to load, the researchers said. It could also launch a denial-of-service attack.

The internet giant, recognising that malicious applications were becoming a growing problem, introduced Bouncer in February.

Google must have realized reacting was a losing battle and some kind of app review was needed, hence Bouncer, Schulte said. There wasn't a lot of information available publicly about the technology or how it worked, which piqued Trustwave's curiosity, Percoco said.

“We wanted to test the bounds of what it's capable of," Percoco said.

The team created a benign app that just reported back to Trustwave whenever it was executed, and made it past Bouncer and onto Google Play. The team had determined Bouncer's IP address by this time, and modified the test app to act maliciously only if it was executed outside Bouncer.

The bridge lets developers remotely add new  features to a program using JavaScript, or changing the look and feel of an app by modifying the HTML, without having to go back through the entire app approval or update process. Facebook and LinkedIn use this method for their apps, Percoco said.

Trustwave used the JavaScript bridge to add increasingly malicious capabilities to the app. Bouncer scanned the app repeatedly, but never noticed the new malicious features. Only when the team tweaked the app to execute every second did Bouncer notice it and suspend the developer account, Percoco said.

Trustwave shared its findings with Google, and Percoco said the company was a “great organization to work with." A Google spokesperson could not be reached for comment by SCMagazine.com.

Got a news tip for our journalists? Share it with us anonymously here.
Copyright © SC Magazine, US edition
Tags:
blackhatblackhat 2012bouncergooglemalwaremobileplay storesecuritytrustwave