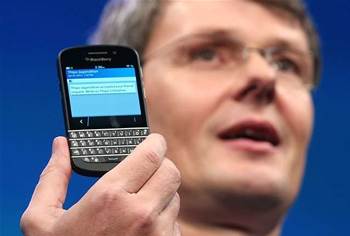 One of many options considered.

A deal to take BlackBerry private could make sense from a financial standpoint, say private equity executives, though any such move won't by itself make the smartphone company more competitive.

The numbers for a leveraged buyout could still work, these executives said, after a report that BlackBerry's board was warming up to the possibility of going private as it fights to revive its fortunes.

The company's new openness to a leveraged buyout follows six weeks in which BlackBerry shares have taken a pounding, as sales of its new line of smartphones have so far failed to live up to the expectations of some analysts. The company is still bleeding subscribers and it faces an uphill battle to regain market share from Apple's iPhone and devices that run on Google's  Android operating system.

Even so, the company has a core stable cash flow element that could support debt for a leveraged buyout, say some senior private equity executives involved in the sector. The sources asked not to be identified because they were not authorized to speak publicly.

BlackBerry is currently worth about US$5 billion, but many of its investors like Ross Healy, a portfolio manager with MacNicol & Associates, whose clients own BlackBerry shares, note that the company has more than US$3 billion in cash alone.

"My own analysis tells me that the stock is worth an awful lot more than US$5 billion," said Healy.

While sources told Reuters that no deal is imminent and that BlackBerry had not launched an active sale process, its openness to going private signals a major shift in the thinking of its management, which has long focused on engineering a turnaround as a public company.

BlackBerry declined to comment on the report that its management is open to the idea of going private.

A senior executive at a large Canadian pension fund that has worked closely with private equity players agreed that the math of a leveraged buyout could work, and that they and other funds in the country would consider getting involved in any such deal should it arise.

"In terms of the scale and the nature of the asset, if you are convinced that the value is there, there is no reason why PE wouldn't look at it," the pension fund executive said.

"If private equity can buy Dell, they can buy anything," the executive said, referring to Silver Lake Partners and founder Michael Dell's efforts to buy the struggling PC maker for US$25 billion.

To be sure, going private would not likely be a panacea for BlackBerry. Private equity executives and analysts contend there was no obvious way to restructure the company in the aftermath of any buyout.

In fact, a wide range of private equity firms as well as technology companies have looked at BlackBerry over the past two years as its once-dominant business went into a tailspin.

Last year, sources said companies, including Microsoft and Amazon.com held talks with BlackBerry about possible tie-ups. And earlier this year, a senior Lenovo executive said the Chinese computer maker would consider a bid for BlackBerry to boost its own mobile business.

Sources say Wall Street bankers have also pitched deals that involve BlackBerry to companies such as HTC and Samsung.

Yet, no one has managed to strike a deal so far.

"The problems don't change whether you're private or public," said Charter Equity analyst Edward Snyder. "You're facing the same set of problems. It just comes down to whether or not one of the two structures is better set up to solve them."

Even so, analysts and investors say taking BlackBerry out of the public eye could make sense, as it would give the company a bit more breathing room to work through its turnaround.

"It makes a tremendous amount of sense for somebody who can invest patiently and who is not going to be looking at the stock price from day to day," said Healy.

The company last year also named Timothy Dattels, a senior partner at private equity firm TPG Capital LP, to its board of directors, sparking a flurry of speculation that BlackBerry may consider a leveraged buyout, or going private.

Dattels's nomination came last June, shortly after BlackBerry hired J.P. Morgan Securities LLC and RBC Capital Markets to help it evaluate strategies, including a possible overhaul of its business model, as well as other moves such as expanding the BlackBerry platform through partnerships and licensing deals.

BlackBerry maintains that investors need to give it more time.

As a first step, many analysts say BlackBerry is more likely to focus on collaborations and partnerships. And its CEO Thorsten Heins, has suggested the same.

"We now have something to fight with and that offers us a lot of opportunities that the board and management can use in order to create value for this company," Heins said last month at the company's annual shareholder meeting.

Heins stressed a focus on "go to market partnerships" and "investment partnerships" for BES 10 - the latest iteration of the company's mobile device management tool, which now also allows BlackBerry's corporate and government clients to manage and secure Apple- and Android-based devices on their networks.

One source said the company has recently had discussions with private equity firm Silver Lake Partners about potential collaboration in enterprise computing.

While it is unclear how such a collaboration would work, or be structured, such a tie-up could prove to be attractive for BlackBerry, as it would boost confidence in its new platform and the company's overall strategic direction.

Partnerships, however, are complicated and come with their own set of pitfalls.

"Even if you partner, it doesn't mean that you're going to turn it around," Snyder said. "Nokia's partnership with Microsoft is not going anywhere. You have to pick the right partner and the arrangement has to be set up correctly."