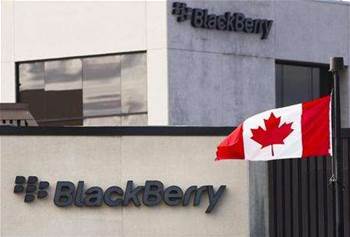 A Canadian flag waves in front of a Blackberry logo at the Blackberry campus in Waterloo, September 23, 2013. Credit: Reuters/Mark Blinch

Goes with Plan B?

Struggling smartphone maker BlackBerry on Monday signed a tentative deal to be acquired by a consortium led by its biggest shareholder, setting a US$4.7 billion (A$4.98 billion) floor in the auction of the Canadian company that pioneered on-the-go email.

BlackBerry, 10 percent owned by Prem Watsa's Fairfax Financial Holdings, has been on the block since August after a few difficult years.

Previously known as Research In Motion, the company was late to the game of consumer-friendly touchscreen smartphones, and it bled market share to the iPhone from Apple and devices using Google's Android operating system.

The offer comes from a consortium led by Fairfax that has offered US$9 a share in cash to take BlackBerry private, away from constant Wall Street scrutiny. The group is seeking financing from Bank of America Merrill Lynch and BMO Capital Markets to complete the deal.

"This is pretty much Plan B. They've clearly not hit the targets," said Donald Yacktman, president and founder of Yacktman Asset Management which holds a stake of less than 1 percent in BlackBerry according to Thomson Reuters data. He added he does not expect a counteroffer.

BlackBerry has until November 4 to seek superior offers, which is also the deadline for the Fairfax-led group to conduct its due diligence.

Its Nasdaq-listed shares, halted pending the afternoon announcement, rose to US$9.20 as trade resumed but quickly slipped back to around US$8.80 by mid-afternoon, indicating the market's lack of faith that other offers would emerge.

"I would think a competing buyout offer is quite unlikely," said Elvis Picardo, strategist and vice president of research at Global Securities in Vancouver. "The miniscule premium, and the muted market reaction, is another indication that the market views the odds of a competing bid as slim."

A BlackBerry statement did not name the members of the consortium, although many in the financial community see Canada's deep-pocketed and influential pension funds as likely participants.

The funds, with assets around the world, traditionally take a long-term view in their investment decisions. Officials at the biggest funds either did not reply to requests for comment, said they had no information or declined to comment.

"We never discuss whether or not we plan to enter into any investment," said Deborah Allan, spokeswoman for Ontario Teachers' Pension Plan.

BlackBerry pioneered the concept of on-your-hip email with its first email pagers, offering secure email away from an office, and for years it was the must-have device for governments, businesses and lawyers.

But recent years have been hard. BlackBerry warned on Friday it would report revenue on the sale of just 3.7 million of its phones for the entire second quarter, as well as writing down almost US$1 billion worth of unsold phones.

"This is probably the best possible outcome of several unattractive options for BlackBerry," said Jack Gold, principal analyst and founder of J. Gold Associates. "Going private and potentially bringing back the founder of the company, Mike Lazaridis (as has been rumored) could buy them some time to put the house in order."

Lazaridis, BlackBerry's co-CEO until early 2012 and a board member until March, did not respond to requests for comment.

The going-private offer price is far below BlackBerry's share price in the heady days before the iPhone ended the BlackBerry's dominance of mobile communications.

Even in its more recent history - littered with profit warnings, job cuts and devices that arrived late to disinterested audiences - BlackBerry shares have rarely dipped below US$9.

BDT & Company, LLC, BofA Merrill Lynch and BMO Capital Markets are acting as financial advisors, and Shearman & Sterling LLP and McCarthy Tétrault LLP are acting as legal advisors to Fairfax in connection with the transaction.