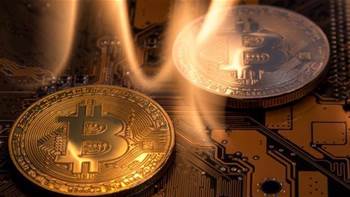 “Distributed ledger technology has got big implications for the future. But trustless blockchains might not.”

That’s the frank assessment from the Reserve Bank of Australia’s head of payments policy, Tony Richards, who on Tuesday tipped another bucket of cold water on highly volatile cryptocurrencies like bitcoin as a technology sideshow rather than a revolution.

Speaking at an Australian Business Economists briefing in Sydney, Richards pressed home the prevailing view that for all the talk of disruption in payments platforms and networks, trust and efficiency will continue to be the real drivers.

“The price of bitcoin has fallen by nearly 70 percent from its peak, to just over US$6,000 currently, and there have been sharp falls in most other cryptocurrencies. Much of the public frenzy seems to have calmed and the market capitalisation of the overall cryptocurrency sector has fallen back to around US$250 billion,” Richards said, before outlining scalability issues. 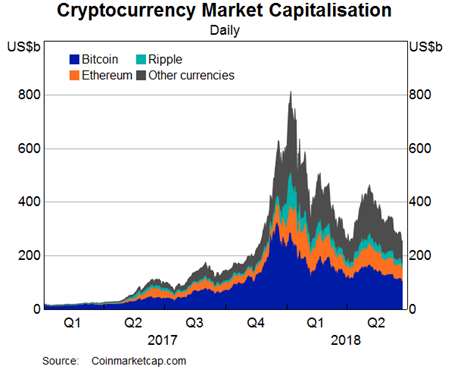 “The number of confirmed bitcoin transactions briefly got to over 400,000 per day in December [2017] when the speculative frenzy was greatest. That corresponds to a peak of about 4.5 transactions per second (TPS). But, to put that in context, Visa Net has a theoretical maximum of over 65,000 TPS.”

Australia’s central bank payments chief went on to observe that in that same month “there were over 100,000 transactions in the queue waiting for confirmation”, adding that long queues resulted in miners taking the highest transaction processing fees, sometimes as high as US$50. 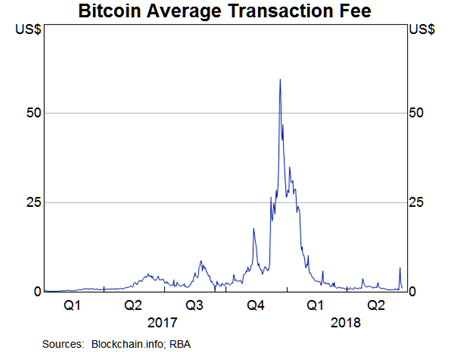 There’s also the question of what you can (legally) buy with bitcoin and other cryptocurrencies when you’re not busy chewing up electricity mining coin.

Richards confessed he himself has had a bitcoin wallet since June 2014 - containing a “small amount of bitcoin” - and has used it “for a few small transfers and even a retail transaction at a café that accepted bitcoin.”

But things might be abating after an initial corporate rush to claim cryptocurrency kudos through payments acceptance.

“The number of businesses accepting bitcoin may actually be falling,” Richards said, noting “some significant US online merchants announced a few years ago that they were accepting bitcoin, but some of these (for example, Dell) have since stopped doing so.”

One of the reasons the RBA remains vigilant and vocal on the effects of cryptocurrencies is its mandate to oversee an efficient and reliable payments system.

It has previously intervened in Australia by instigating the New Payments Platform and by periodically clobbering transaction costs like interchange fees applied to conventional payment networks.

Richards said that while authorisation of a credit or debit transaction is “close to immediate” bitcoin users are “typically advised to wait for the creation of about six additional blocks (i.e. about 60 minutes) before relying on their transactions being final.”

“Nine years after its launch and about five years since it entered the public consciousness, bitcoin continues to have structural flaws that make it unsuitable for many uses, many of which stem from its inefficient verification process,” Richards observed.

He also reiterated RBA Governor Philp Lowe’s position that there isn’t a case at the moment to start issuing an electronic Australian dollar or eAUD.

Richards said “most money is already ‘digital’ or electronic in form” with currency (hard cash in notes and coin) accounting for just 3.5 percent of “broad money” with cash use in the payments mix falling from 70 percent in 2007 to 37 percent nine years later. 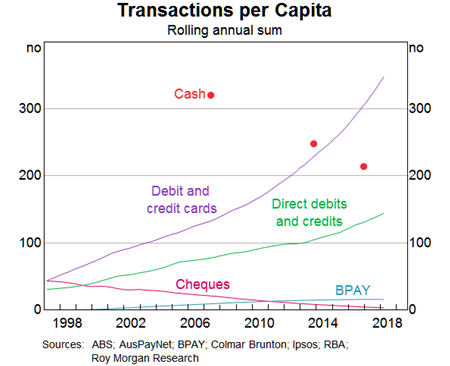 One area the RBA is closely watching is possible future utility in tokenising electronic bank settlements, particularly around Electronic Settlement Accounts (ESAs) which are used through the trading day to counter any build-up of large exposures in payment obligations.

Richards acknowledged agitation from the fintech sector on the basis “the introduction of another form of central bank balances could be quite transformative” but questioned if proposed use new cases “really need central bank money on a blockchain.”

But he again suggested that using existing instruments might be as good as creating new ones.

“They might also be possible using other real-time payment rails – perhaps the NPP,” Richards said.

That’s not to say the central bank won’t still be keeping a close eye on developments, even if it doesn’t yet rate them.

“Cryptocurrencies and distributed ledgers are fascinating developments both from a payments and a broader economic perspective,” Richards said.

“The Reserve Bank will be continuing to study their implications and we are very interested in continuing to interact with entities, both large and small, that are active in this area.”