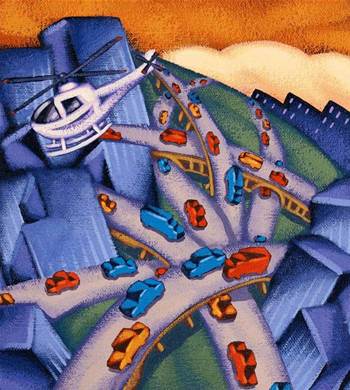 Biometric imaging, holograms and computer chips feature in driver licenses that will be rolled out in Queensland late this year.

The smartcards will be trialled in August by staff at the Department of Transport and Main Roads, before being introduced in the city of Toowoomba.

They will then be rolled out to transport customer service centres, police stations and rural Government offices throughout 2011, replacing laminated licenses that have been in use for more than 20 years.

Each card stores a 16 point digital image of the licensee's face on an embedded computer chip that also stores other personal information and a PIN.

The image is also stored centrally by the Department of Transport and Main Roads, and used for identity verification when a license is renewed.

"Right around the world banks and other institutions are expecting safer and more secure forms of identification and this card will deliver that," said State Transport Minister Rachel Nolan in a statement.

"Having online, on-the-spot access to these images will give us another tool in the fight against criminals trying to steal identities and obtain multiple cards under different names."

However, Nolan said the price "compared favourably to other major Australian states" -- driver licenses currently cost $151 in NSW, $145 in the ACT and $150 in SA.

The Queensland Government also plans to introduce new heavy vehicle, marine, bus and taxi licenses, as well as an Adult Proof of Age Card that will replace the current 18+ Card.

It will be the first state to use smartcard technology in its driver licenses, and is expected to comply with the ISO 24727 standard, Smartcard License Interoperability Protocol (SLIP), and the Government's National Smartcard Framework.