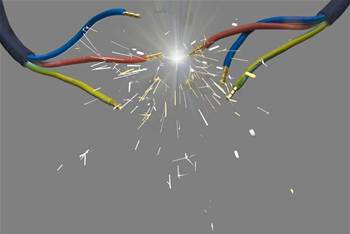 The power surge hit at around midday on Tuesday, causing the data centre's power to shut down and client services to go offline for about two hours from around 12:30pm AEST.

Hostworks also counts the ABC, Fairfax, Foxtel, IAG, Jetstar, and UNSW among its customers, according to its website.

The outage was sparked by a power supply upgrade that occurred throughout the wider Kidman Park industrial precinct Hostworks’ facility is located in, which is fed by two substations nearby.

The upgrade was conducted by South Australia Power and was aimed at improving supply to the precinct, iTnews understands.

The issue occurred when the high voltage power supply - which supplies electricity to the data centre - was switched over to the new source, inadvertently causing an extremely high voltage surge.

Hostworks data centre's uninterruptible power supply (UPS) went into protective mode as a result and shut down all power into the facility - including back-up.

If it had not done so, the surge would likely have had "disastrous" consequences for the centre's equipment, Hostworks managing director Will Berryman said.

"If the surge had got through it wouldn't have been a very pleasant day for us," he said.

"High voltage power at the level involved yesterday is a very specialised, pretty serious type of environment that needs to be carefully worked with. "

The company first moved to ensure the safety of its own staff and other workers in the area before working on restoring client services. It will work with electrical experts and local authorities over the next few days to gain a better understanding of the issue and ensure people working in the area are safe.

Berryman said he "really regretted" Hostworks customers experienced an outage but said the company was taking a "methodical, logical" approach to understanding what had happened and to do whatever possible to prevent it from re-occurring.

"You try to predict as many issues as you possibly can - in this case given this is such an obscure and complex issue which was really out of our control, our focus is on recovery and safety," he said.

"I can try and predict as much as possible but the business needs to be geared up to do recovery in the face of a major catastrophy, as in this case. I can only make sure our company is agile and rehearsed and trained in making sure we recover customer services as quickly as possible."