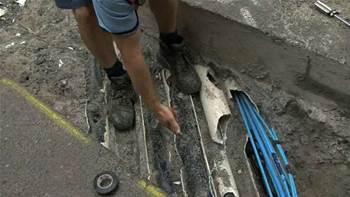 Telstra has shown off its ability to quickly repair a fibre optic and copper cable cut in Sydney's central business district that was damaged by an Energy Australia contractor less that two weeks ago, leaving thousands without services.

In a video on its corportate YouTube account the telco showed footage of how it repaired the cables.

The video also explained why Telstra's cables were closer than usual to the surface of the road.

"When they [the Energy Australia contractor] started saw cutting the road they went down about 250 millimetres and then, with the jack hammer on a little mini excavator, they started excavating the concrete," the video said.

"When they removed the 250 millimeters of sub-grade, or sub-base of the road, they then jack-hammered down further, about 300 millimeters, and this is where the Telstra network was.

"Why [was] the Telstra network so shallow? Because we are going on top of railway tunnels."

It remained unclear whether the Energy Australia contractor used "Dial Before you Dig" before commencing the works.