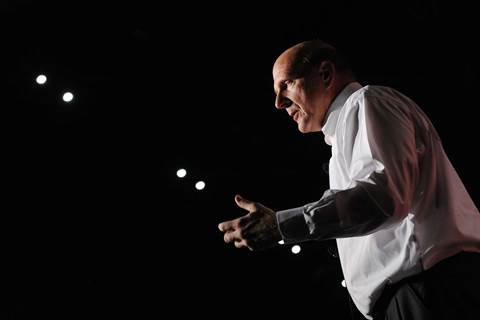 Microsoft CEO Steve Ballmer has given his ’encouragement’ to the Australian government and telcos to come together and ’get on with’ making high-speed broadband in Australia a reality.

In his keynote speech to approximately 1,000 developers (see photo gallery right), Ballmer skirted the finer details of the NBN debate, but said that high-speed broadband delivered at a fair price would be ‘the best thing in the world’ to encourage more rapid adoption of cloud computing services like Windows Azure.

“I gather there’s a whole big debate between the government and telcommunications providers,” said Ballmer.

“I hear about it more in Australia than anywhere else. I’ll just give encouragement for people to get on with it, whatever needs to happen. I don’t know what that means, but I’m sure it will happen.”

One of Ballmer’s key messages to Aussie developers was that the future should enable them develop applications once and then reuse the code to push a single application into multiple environments.

“The goal is to create symmetry between the cloud and data centre environment,” said Ballmer.

“Everything you can do in a corporate data centre you should be able to program against in an Internet cloud in a sense.

“There shouldn’t be three different programming models to write an application and push it into the cloud, give it to a hosting provider or push it out to a customer premise. We want you to be able to write code and reuse it between the PC, mobile, server and cloud.”

Ballmer also attempted to position Azure and the firm’s ‘Software plus services’ vision alongside other terms currently in the marketplace.

“But everyone agrees what we’re talking about is a new way of computing.”

Gianpaolo Carraro, a senior director at Microsoft, then deconstructed the Azure (pronounced ‘ahjhooah’) platform into two layers - an ‘essential’ layer consisting of the compute fabric, storage and management, and a second layer that sits above it consisting of optional ‘building block’ services such as SQL Services and Sharepoint.

“We’ve built a lot of assets for the cloud environment,” said Carraro.

“We’ll see a lot of applications exist today move to the cloud and a lot of new applications that will be possible thanks to environment we’ve just released.”
Got a news tip for our journalists? Share it with us anonymously here.