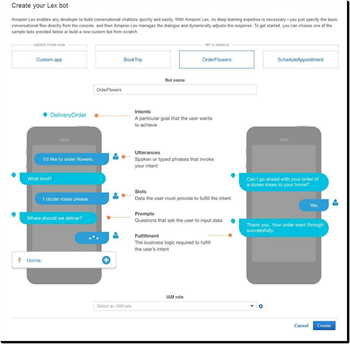 Amazon Web Services has opened up an early version of a chatbot building tool, Lex, based on the company's Alexa voice service for its Echo speakers.

Besides chatbots, Lex can also be used to build web and mobile apps for human-machine interactions such as order taking, information provision, work streamlining, and as a control mechanism for robots, toys and drones, AWS said.

“The service understands context. That allows you to build sophisticated, multi-step conversational interfaces where you can continue to clarify and guide the user intuitively to what they want to go and fulfil,” general manager and director of AWS Dr Matt Wood told the AWS:Invent conference.

The service only works with Facebook Messenger at the moment, with Slack and Twilio support expected to arrive soon.

Lex also works with AWS services such as Lambda for business logic, Mobile Hub for conversational interfaces to enterprise data, and the Cloudwatch monitor.

AWS said Lex will be a fully managed service with no set-up, management or infrastructure scaling needed.

Lex is available as a wait-listed preview in the US East (North Virginia) AWS region only. AWS did not say when it will be publicly available or when it will reach other regions.

This could include people or inanimate objects, facial matching for security, and more. Jassy said Recognition can identify sentiment such as whether a person is smiling or frowning.

Jassy also announced the Polly text-to-speech deep learning service, which allows developers to send streams of text and quickly get an MP3 audio file in return, with life-like voices.

Polly is designed to be responsive and return the audio quickly so as to reduce perceived delays in conversational flows for more natural discussions.

The service currently provides 47 voices in 24 languages, with male and female speakers and a variety of accents.

Paris Cowan attended Re:Invent as a guest of AWS