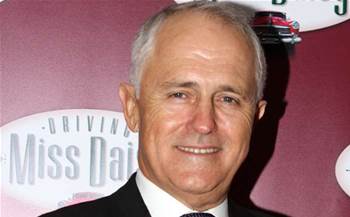 Want Turnbull to deal with industry concerns around existing policy.

Australia's technology and telecommunications industries have welcomed the appointment of former communications minister Malcolm Turnbull as prime minister, indicating optimism for the future based on his knowledge of technology-related issues.

Many key industry figures are also calling for the nation to move on from divisive debates around the multiple technologies being rolled out as part of the NBN.

Industry representatives contacted by iTnews have identified telecommunications competition policy, cyber security, execution on the NBN rollout, and the telecommunications sector security reforms as key policy issues to be dealt with by the new PM.

Communications Alliance chief executive John Stanton said he was heartened by the appointment of a Prime Minister keenly across technology and telecommunications matters.

He said the introduction of technology legislation like the data retention regime would have been "even worse" without Turnbull's efforts.

“He welcomes substantive debate on complex issues, listens to the views of stakeholders, including industry, and typically works toward a rational position that balances competing interests,” Stanton said.

“During the various national security-related initiatives that have impacted the telco sector during the past 12 months, Malcolm has worked behind the scenes to seek an appropriate balance between security, individual liberty and regulatory impost."

“Mr Turnbull has outlined his goal to create a future-proofed nation, one that is fit to drive higher economic growth and improved standards of living,” Campbell said.

“As the former minister for communications, Mr Turnbull understands that in order to achieve this goal and be competitive in a hyper-connected global market, we need to ride the wave of technology led disruption or risk being left behind by our international peers."

“We congratulate Turnbull on his rise to the prime ministership and look forward to having someone in the top job with a detailed knowledge of communications matters, as he does. There certainly have been instances in the past where leaders haven’t understood comms,” Althaus said.

“Turnbull has been a very effective communications minister for the industry as a whole. We welcome his focus on innovation, technology and economic reform and look forward to working constructively with the Turnbull government,” Penn said.

A Vodafone spokesperson said Turnbull understood the "central role that a competitive telecommunications market plays in maximising the opportunities of an agile and productive digital economy".

NBN focus should now be on execution

One of the more controversial policies adopted by Turnbull as communications minister was the move to a multi-technology mix model for the NBN.

Despite constant heated debate on the approach, a number of key industry figures such as Stanton have called for the discussion to move on.

“It’s all about execution from this point. We would of course expect government to maintain its commitment to the nation’s single most important infrastructure initiative,” Stanton said.

Internet Australia chief executive Laurie Patton as well as the AIIA's Campbell similarly called on Turnbull and the incoming communications minister to fast-track the rollout of the NBN.

“History will certainly judge us poorly if we lag behind in the next era of global innovation because we failed to deliver open and accessible internet,” Patton said.

“We look forward to an accelerated rollout of the NBN and increased attention to how it will be used more effectively to drive innovation across all industries and provide a platform for the jobs of the future,” Campbell said.

Competitive Carriers’ Coalition executive director David Forman said it was more important to make sure services on the NBN remain competitive rather than focus on the technologies used in the network.

“This is an opportunity for a higher level of bipartisanship. Both parties agree on the NBN, and the things they disagree on – around technology choices, are really in the past and at the margins,” Forman said.

“It’s an opportunity to get the focus back on the things that really matter, like the state of competitiveness in the industry."

A commissioned report on cyber security in Australia was handed to the government earlier this year, and the Coalition is expected to release its resulting policy in late October.

“More sharing of information with the industry, and AISA is looking forward to play a crucial role in this.”

In the telecommunications sector, there are hopes the release of the national cyber security will be taken as an opportunity to streamline the number of agencies dealing with cybersecurity.

“As per our submission to government, we need to rationalise the current arrangements, whereby there are too many agencies with overlapping responsibility for cybersecurity,” Comms Alliance's Stanton said.

Internet Australia's Patton called for the federal government to stop using national security as a pretext for cracking down on the internet.

“We trust that Mr Turnbull will abandon the Abbott government's practice of enacting ad hoc legislation that affects the internet as part of its national security scare campaign,” Patton said.

“We also hope that the Turnbull government will consult with Internet Australia as the peak body representing Internet users before making laws that affect the internet."

A number of key figures and industry groups in the sector have previously attacked the proposed laws as too broad, intrusive and burdensome, and ultimately ineffective.

“Industry would not lose a lot of sleep if that initiative slid off the agenda, in favour of reliance on the existing strong cooperation between security and law enforcement agencies and communications service providers," Stanton said.

The AMTA is hopeful about the leadership change will prompt a change in attitude on the proposed reforms.

“There are some issues that are challenging from an industry point of view, and the telco sector security reform is still a live issue,” Althaus said.

“We’re interested in minimising red tape and allowing the sector to get on with things.”

In a speech immediately after winning the leadership ballot, Turnbull said under his leadership Australia would be “agile, innovative and creative”, and promised his government would “recognise the disruption we see driven by technology”.

“In the coming months, Australian businesses will want to see from the new Prime Minister a comprehensive plan which sets out how we will transition towards a more productive and competitive economy over the coming decade, and how government policy will support that change,” El-Ansary said.

“This is a critical time for Australian startups. There is so much to be gained if we can grow this important part of our business community," Bradd said.

"We believe Mr Turnbull has the vision and conviction to do this effectively and we very much look forward to working with the Prime Minister and his cabinet to ‘seize the day’ in support of Australia’s many startups."