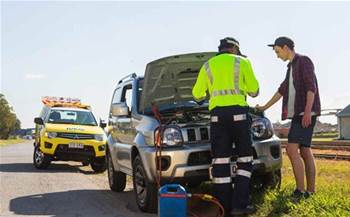 Five of Australia's automobile clubs are in the final leg of a three-year project to replace their ageing and disparate roadside assistance systems with a single, integrated platform.

The five auto clubs' progressive cutover to the new system through October and November will be the culmination of three years work, Glenn Toms, chief executive of RACQ Assistance, told iTnews.

The Australian implementation will be a showcase project for Hexagon: it pulls together a range of functionality into an end-to-end system, including computer-aided dispatch, integration to the clubs’ IT systems, and software from Australian vendor Surefire Systems for point-of-sale and inventory capability.

Once it goes live, the platform will cater for around 2.5 million Australian members and 7000 jobs per day across the five clubs, Toms said.

The CARS system will overcome one of the biggest challenges for the federation of state-based clubs: how to support members across state lines.

"Over 110 years, each club built up very large roadside assets in their state as the predominant providers of roadside [assistance] even in a commercial market. Each uses a separate system, separate database and separate computer-aided despatch," Toms said.

"That works fine in that state but as our members travel across states, reciprocity isn't great."

The two big "game changers", according to Toms, are the move to a common system for the first time in more than a century; and the shift from on-premises infrastructure to an outsourced cloud-based model hosted by Thomas Duryea Logicalis.

The system is co-owned by the WA, SA, and Queensland clubs via a new entity, the Australian Club Consortium (ACC), which was established specifically to own and manage shared IT platforms.

Toms said there were a few reasons why the two biggest auto clubs in the country – the RACV and NRMA – had not joined the CARS project: "we all ... decided it was just too big [a project] and too big a risk in one hit".

Western Australia, South Australia and Queensland, however, could not afford to wait: they were all on "burning platforms".

Tom said the next logical candidate would be RACV, which is already using an old version of Hexagon.

Incident response is a complex process that can span weeks, especially for members with premium-level support.

"You might be a Queensland member in Broome, have a transmission failure and choose to get it fixed. That takes a week, so you get a hire car. If you choose to stay we will cover accommodation. Or you might want to fly home, we'll fly you home and get the car or caravan back. That is incident management, over two weeks," Toms said.

"At any point in time we might have 200 cases being managed across the country. Incident management will ensure it is being managed – we won't forget someone in a remote location."

When a member has an incident, they can request roadside assistance either digitally or via the call centre and will be routed to the relevant state auto club.

Validating someone's membership was previously a manual process – if an RACQ member contacted Western Australia's RAC, the call-taker would have to do a manual database check to validate their membership.

Now, after the stricken member sends their location using a mapping app on their phone or by describing a waypoint, the CARS despatch application will run "million of algorithms in real time to find how to get a patrol vehicle or tow truck in the fastest possible time", Toms said.

"The automobile clubs' target is to be on the roadside in 20 minutes."

Once the support vehicle reaches the member, the responder can use the CARS system to access a host of technical information via their mobile device. The platform is compatible with iOS, Android and Windows.

The rollout will be staggerd between 10 October and 15 November to keep risks at a minimum. The two lowest-volume clubs, South Australia and Tasmania, will go first, followed by Western Australia and finally Queensland, which is biggest in terms of volume.

For each cutover, the old system will be switched off at midnight and the new system turned on at 6am, with jobs handled manually during the intervening period.

Clubs will have the ability to switch back to existing systems in real-time in the event of an unforeseen disaster, Toms said.