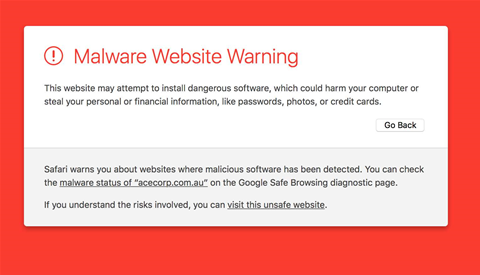 Magento hoster and security specialist Willem de Groot showed iTnews a list of 5900 sites around the world running unpatched, vulnerable versions of the web shopping cart, which have been hacked to serve up malicious Javascript code to unsuspecting customers.

Some 267 vulnerable Australian and New Zealand Magento stores were found by de Groot, who has set up the Magereport site, providing a free check to see if the latest patches are installed for the popular e-commerce platform.

The Australian sites range from online retail shops to art galleries and not-for-profit organisations. iTnews contacted a sample of operators, asking if they were aware of the issue and if they intended to address it.

Most of those contacted did not respond, but Bart Nanka, who manages an online Queensland organic herbs retailer, said the company's development team patched the site after being notified by iTnews of the issue.

Some Australian sites on de Groot's list are blocked by Google's Safe Browsing feature, used in Chrome and other browsers to warn users of malware.

Analysis by de Groot of the obfuscated malicious Javascript revealed that the code captures credit card details entered by customers and transmits them to a site hosted by a Russian provider.

The card skimming occurs without customer interaction or notification. De Groot said the skimming incidents have been taking place since November 2015, thanks to site operators being slow to patch their stores for Magento vulnerabilities.

One high-profile website that served up the card-skimming Javascript malware is run by the United States Senate Republicans for soliciting donations. The site was patched earlier this month, but de Groot estimated that the malicious Javascript had been injected into its Magento cart some six months ago.

The number of e-commerce sites serving up the malicious Javascript to customers has risen sharply since November last year when the malware first appeared.

The malware authors have evolved their code since last year with multi-layer obfuscation to make it harder to detect, and better algorithms to capture payments pages and providers such as Paypal.

He warned that apart from being blocked by Google, sites that serve up the card skimming malware could be penalised by issuers such as MasterCard and Visa.