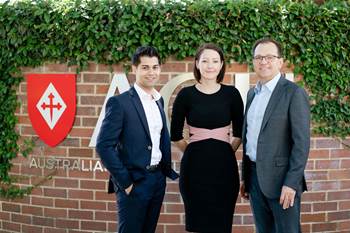 Ahead of ASX listing.

The Australian Catholic University has committed to purchase five million shares of Sydney based online education platform OpenLearning ahead of the company’s planned listing on the Australian Securities Exchange.

OpenLearning was founded in 2012 that delivers software-as-a-service to 55 education providers in Australia and South East Asia, connecting them to 1.65 million students.

This is the first time ACU has participated in an initial public offering (IPO), purchasing $1 million in shares at the IPO issue price of 20 cents - representing a sizeable chunk of the $8 million OpenLearning plans to raise before a proposed listing on 6 December under the ticker “OLL”.

ACU was the only Australian university to partake in the capital raising, however, OpenLearning has relationships with nine local universities including the University of Technology Sydney, University of Melbourne, and Charles Sturt University.

It was also the university’s first direct investment in a technology company for a number of years, ACU CFO Scott Jenkins said.

“We are exploring a range of further investment opportunities that have a positive impact on our staff, students, partners and communities. We are excited to support OpenLearning, a company which we believe shares our commitment to the pursuit of knowledge by creating opportunity and fostering innovation and ethics to bring a unique perspective to higher education,” Skrbis said in a statement.

OpenLearning CEO Adam Brimo acknowledged that it was unusual for a university to partake in an IPO like this, when the industry generally preferring to maintain a stake in the companies and products built on the intellectual property spun out of research conducted at the institutions.

“In Australia, it is rare for universities to invest in technology companies so this investment is a testament to the real and positive impact that OpenLearning is having on learners, higher education providers and the Australian education technology sector,” he said.

“We look forward to developing our partnership with ACU and supporting their strategic priorities.

“OpenLearning received commitments well in excess of AUD$8 million so we have closed the offer and we are confident that we will be able to list this December.”