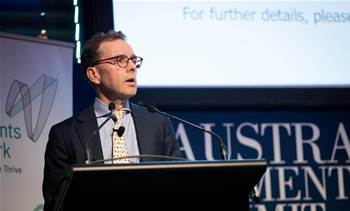 Thousands of bank-branded automatic teller machines that line the halls of shopping malls, service stations and main street branches are poised to be scrapped as Australia’s major retail institutions prepare to outsource cash distribution, most likely to a new collective utility player.

As the Australian population embraces the cashless economy at a rate of knots, the Reserve Bank of Australia – which oversees both payments system regulation and the production of banknotes – has firmly signaled it will not oppose moves to consolidate machines under an umbrella operator.

The positive stance on the formation of a new Australia-wide cash distribution utility was diplomatically articulated to the financial services industry late last month by the head of the RBA’s Payments Policy Department, Tony Richards amid growing evidence decline in cash transactions.

“There are already some signs of this in the ATM market, where bank and non-bank deployers have begun rationalising their fleets. Policy concerns could arise if there was a significant decline in ATM coverage that made it difficult for people to access cash, particularly in remote or regional locations,” Richards said.

“However, some sensible consolidation of the ATM network could result in a more efficient and sustainable ATM industry – one possibility is that this could come through some form of industry utility.

"I expect that we [the RBA] would have an open mind to an arrangement that resulted in a more sustainable ATM industry that continued to provide services where they are clearly still needed.”

Richards’ comments come ahead of the RBA’s official revelation later today over how much cash is on issue in Australia as opposed to how much is being used.

As both the payments system regulator and a keen proponent of systemic efficiency (read lower processing prices) the RBA faces a bizarre contradiction.

And it’s causing a rather curious potential infrastructure crisis the central would prefer to avoid.

Despite the wild success of tap-and-go transactions and strong growth in card transactions for increasingly lower value transactions the amount of physical cash in the market just isn’t abating.

“Around the turn of decade, Australians went to an ATM, on average, around 40 times per year. Today, we go to an ATM around 25 times a year and the downward trend is likely to continue,” RBA Governor Philip Lowe told the Payments Summit.

“At the same time as the use of cash for payments has been declining, the number of electronic transactions has been growing strongly. Today, Australians make, on average, nearly 500 electronic payments a year, up from around 100 per year around the turn of the century.”

A nation of hoarders

Yet the cash that goes out from the RBA isn’t actually coming back – it’s still officially circulating, meaning that Australia is a nation of cash hoarders. The central bank knows because it prints and counts the notes.

“It is worth pointing out that despite the decline in cash use, the value of banknotes on issue, relative to the size of the economy, is close to the highest it has been in fifty years,” Lowe said.

“For every Australian there are currently around thirty $50 and fourteen $100 banknotes on issue.”

Lowe noted that there is “an apparent paradox between the declining use of cash and the rising value of banknotes on issue” adding that the “main explanation is that some people, including non-residents, choose to hold a share of their wealth in Australian banknotes.”

It’s not like people are flooding term deposits either.

“The opportunity cost of doing this is less than it used to be because of the low level of interest rates,” the head of Australia’s central bank surmised.

What the RBA is staring down, however, is that despite all to $100 notes held under the national mattress people just aren’t hitting the cash machines anymore making them a heavily duplicated and expensive infrastructure white elephant banks don’t want to maintain.

When ATMs were first introduced in Australia around 1981, the rollout was swiftly followed by the launch of then EFTPOS (Electronic Funds Transfer at Point of Sale) in 1984 and what the CBA calls “electronic home and office banking” a year later.

A major innovation in terms of customer access was that bank ATMs were essentially interoperable between Australian and New Zealand institutions from the get-go because they used the same core debit system network, the same used to underpin eftpos network when it launched and offered cash-out at the checkout.

(Former CBA chief executive and reformed assembler coder Sir Ralph Norris liked to humour CBA IT vendors with the observation that not only did he help write eftpos, it actually went live in New Zealand first; this led to the riposte that CBA stood form the Commonwealth Bank of Auckland.)

Now, almost 40 years later the RBA is trying to smoothly manage the phased withdrawal of what is essentially public infrastructure without leaving communities and more vulnerable people in the lurch.

It is understood that while there have been some initial discussions about ATM fleet consolidation – which in technical terms is relatively simple – a utility brand is yet to be settled on.

Not so frictionless payments

Also in the mix is ongoing friction between some banks and Australia Post, notably ANZ that has refused to stump up a branch access fee to the government enterprise to cover the cost of accepting over the counter bill payments in regional areas that no longer have a bank branch.

The RBA is also wary about the reliance on a solely electronic transaction system given the unenviable history of outages persistently hitting Australia’s banking sector.

“While it is difficult to predict the future, I expect that banknotes will remain part of our payments system for some time to come. In some situations, paying with banknotes is quicker and more convenient than paying electronically, although this advantage is less than it once was,” RBA chief Lowe observed last month.

“Some people also simply prefer paying in cash – our 2016 survey indicated that around 14 per cent of Australians had a preference for using cash as a budgeting tool.”

And then there is the fickle state of monetised electrons.

“Perhaps a more important source of ongoing demand is the fact that using cash does not require the internet to be up, electricity to be working and the banks' systems to be operational,” Lowe said.

“Banknotes are therefore an important emergency or back-up payment instrument. They are particularly useful in the event of natural disasters or failure of the electronic system. Perhaps one day the various systems will be so reliable that a backup will not be needed, but that day still seems some way off.”

Even so, Lowe is convinced the shift to electronic transactions is for the better, even if the great polymer factory and its legacy fleet of automatons needs to endure in the interim.

“Overall, the shift to electronic payments that is occurring makes a lot of sense – it is similar to other aspects of our lives where things that used to be physical have been supplemented with, or replaced by, technology,” Lowe said.

“This shift is likely to promote our collective welfare. I say that even though the Reserve Bank is the producer of banknotes and earns significant income, or as it's known, seigniorage, for the taxpayer from their use.”

Having recently had to call on cash after his credit cards were compromised, having some physical alternatives must have some residual appeal to the RBA chief.