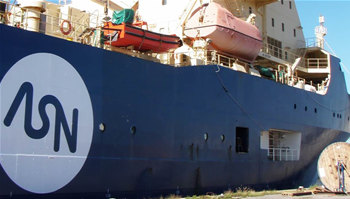 Cable and repeaters destined for the Australia Singapore Cable (ASC) project are now en route to Singapore and Christmas Island as the Vocus-owned initiative prepares to start the main cable lay.

The company this week said 4600km of cable and 50 repeaters had been loaded onto the cable-laying ship Ile de Batz - which is doing the run from Christmas Island to Perth - and onto a Singapore-bound freighter.

Once in Singapore, the freighter will offload its portion of the cable to the Ile de Re, a second cable ship which will complete the lay from Singapore to Christmas Island.

The cable is being laid by two different ships because different techniques are required at either end.

The lay from Australia is mostly deep water, so the cable is to be laid on the seabed. The route out of Singapore, however, traverses shallower waters where subsea cable breakages are frequent.

Already, the company has laid the first 10km of the cable running out of Singapore Harbour by placing it in a 10-metre-deep trench under the seabed.

“The Ile de Re will pick up the shore end of the cable [10km out from the harbour] and continue the lay at a depth of up to four metres below the seabed for the rest of the route,” the company said.

Vocus head of international Luke Mackinnon said burying the cable between 4m and 10m below the seabed would mean it is “deep enough to avoid fishing nets and anchors and provide protection from most earthquake or rock fall damage".

"The Java Sea is located right on the ring-of-fire, a geologically active zone where the earth’s tectonic plates meet. There are active volcanoes, frequent earthquakes and rock slides,” Mackinnon said.

“The Java Sea is shallow and busy with shipping traffic. That means ship anchors and fishing nets often accidentally drag along the sea bed. And then there are the sand pirates - contractors who illegally scoop sand from the sea bed to order."

For the deeper cable lay to Australia, the company said it would armour segments that will stretch across underwater chasms.

The Australia Singapore Cable is due to be operational in mid-2018. It is the first of two new cables to run the Perth-Singapore route, the other being the Indigo project that is heavily backed by telcos and web giants.

The route has been a major bottleneck for some time, since it is served only by one existing cable that is subject to increasingly frequent breakages and lengthy downtime.

Vocus expects about half of all internet traffic will eventually route via Perth into Asia, instead of the current situation where between 80 and 90 percent of traffic routes internationally from Sydney to the US and beyond.