Australia and NZ to get new subsea cable 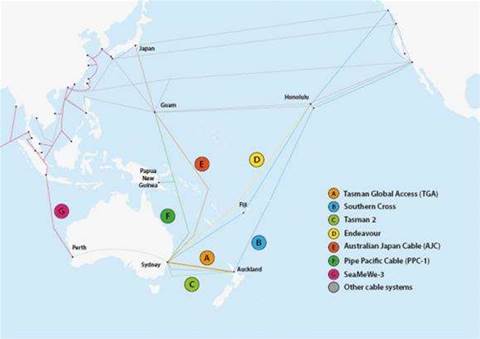 Will add 20 terabit/s capacity by the end of the year.

The first stretch of the Tasman Global Access (TGA) subsea cable will be laid at Ngarunui Beach in Raglan, New Zealand by the end of March, marking the first step in the build of the 2300 kilometre connection to Australia.

TGA is a joint US$70 million (A$92.5 million) project to lay a two-pair fibre-optic cable across the Tasman by Telstra, Spark NZ and Vodafone NZ.

Originally announced in 2013 with a completion date of late 2014, TGA was delayed after Telstra slashed its original one-third investment in the cable to just US$6 million, or a 9 percent stake.

Alcatel-Lucent Submarine Networks has been contracted to lay the cable, which is estimated to be ready by the end of the year.

Once operational, TGA is expected to provide 20 terabit/s capacity. It will complement and provide redundancy for the Southern Cross Cable System, which is 40 percent owned by Spark NZ.

The telcos had originally promised the cable would provide 30 terabit/s capacity but declined to comment on the reduced capacity.

The three telcos also expect TGA to capitalise on burgeoning demand for bandwidth between NZ and Australia, expected to rise by 1100 percent in the next decade.

Initially, the specially-equipped NZ ship MV Tranquil Image will bury three kilometres of optic fibre into the surf zone and sea at Raglan's Ngarunui Beach, before a larger Alcatel-Lucent Submarine Networks (ASN) ship arrives to connect it to the longer length going to Narrabeen Beach in NSW, Australia.

The consortium warned that the schedule for the work on the Australian connection of the TGA was subject not only to weather conditions at sea, but the availaibility of ASN crew, equipment and ships.

Currently, ASN's main cable-laying ship for the Oceania region, the Île de Ré, is engaged in urgent repairs on the Basslink interconnector between Tasmania and mainland Australia. The ship is expected to occupied with that work until May this year at least.