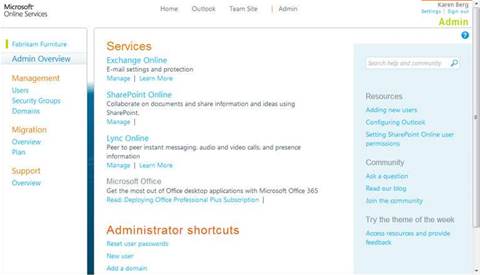 The IT dashboard for Microsoft Office 365.

Microsoft has marked the launch of what it considers a “cloud” version of Office, Office 365, confirming that Telstra T-Suite will be its sole reseller to Australia’s small business market.

The prices announced for Australian customers today are considerably higher than what US customers will enjoy.

Telstra T-Suite will offer Microsoft's ‘P’ or “professional and small business plan” for up to 25 employees for AU$7.99 a user a month, a premium on the US$6 charged by Microsoft directly in the United States. This version is limited to the basic viewing and editing of documents via Office Web Apps.

For mid-sized (over 25 employees) and enterprise customers, Telstra offers the E1 plan, which is AU$15.70 a user a month, which can be purchased from Microsoft directly for US$10 a month.

But to be able to edit and share Office documents online, customers require the E2 plan, which Telstra will sell for AU$25.10 a seat a month, as opposed to US$16 a seat a month directly from Microsoft.

Those enterprise customers that want the feature-rich equivalent of Office Professional served up online, plus integration options with legacy Access databases and Visio visualisation, unlimited email storage and hosted voicemail can opt for the E3 plan, which Telstra will sell for AU$40.10 a seat a month versus US$24 a seat a month from Microsoft.

And finally, those enterprise organisations that want to replace their PBX with a hosted Lync server can have the lot for AU$45.10 a month, versus US$27 a month direct from Microsoft.

* Based on today's exchange rate.

According to Microsoft’s Office 365 FAQs, customers must choose one edition and won’t easily be able to move between any of the options and “may not have data preserved” if its attempted.

Office 365 replaces the Business Productivity Online Suite (BPOS), which offered customers Exchange and Sharepoint as a service. Microsoft said these customers will be offered a transition at some stage within the next 12 months.

For small business customers, it promises a basic Office productivity, messaging and collaboration suite, available via the browser.

But what it can’t immediately replace is the on-premise infrastructure and licenses enterprise customers will continue to pay for if they want federated identity or a feature-rich experience.

The full, feature-rich enterprise versions of Office 365 still require the user to have an up-to-date version of the Windows operating system on desktops (XP and above).

Microsoft’s enterprise customers will also need to retain Windows Server (2008 and above) in order to maintain Active Directory for single sign-on.

Oscar Trimboli, director of the information worker business group at Microsoft Australia said Telstra was chosen as a partner because of the investment in its T-Suite SaaS portal, and the ability for small business customers to have their monthly Office 365 spend arrive on the same bill as other telecommunications services offered by Telstra.

Trimboli said Microsoft was already signing up hundreds of businesses that had used or trialled the hosted office productivity suites of “over-the-top” web providers such as Google and Zoho.

Microsoft invited small business and enterprise customers to the launch, several of which had previously been Google customers or had trialled the Google Apps alternative.

“We’re not going to create a roadmap and then wave goodbye to them as some have,” he said. “That wasn't a joke for those customers that had to say goodbye to an investment decision they had made."

Trimboli said many customers had “thought the definition of success” was documents and email collaboration, but soon came to desire a richer set of tools.

He said Microsoft would have moved sooner to offer a hosted version of Office, but waited for convergence between the availability of mobile networks and devices that could be accessed anywhere, any-time.

More importantly, he said, the hosted offering will address bigger problems Microsoft has with pirated versions of Office in use within the small business market.

“Right now I have a lot of people use a product they don’t pay for,” he said.