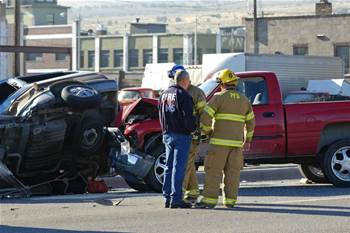 Australia's truck drivers want the responsibility for investigating road accidents involving heavy or autonomous vehicles to be taken away from police and given to the national transport safety bureau.

The federal government is currently conducting an inquiry into issues surrounding the introduction of driverless vehicles in Australia.

The committee of MPs is studying the benefits and social acceptance of autonomous driving technology, as well as safety, legal, and insurance issues, and the flow on effect to public transport and the taxi industry.

The inquiry has been travelling around the country over the past few months to study driverless vehicle policy within the states, which are all in varying stages of development within this nascent area.

In its recent submission to the inquiry, truck driver representative group the Australian Trucking Association said the advent of driverless vehicles would require changes to safety investigations of crashes.

Police - who currently investigate road accidents - are not equipped to deal with crashes involving autonomous vehicles, the ATA argued.

"This existing system is not suitable to the need to investigate the causes of the accident with relevant experts, including where technology and software needs investigation," it said.

It argued the Australian Transport Safety Bureau - which is responsible for looking into aviation, marine, and rail safety incidents - was best suited to investigate autonomous road accidents.

"The ATSB is an independent statutory agency that is separated from transport regulators, policy makers and service providers. It is not a function of the ATSB to apportion blame or provide a means for determining liability," the ATA said.

"The best way to understand the causes of accidents involving autonomous vehicles and generate recommendations to prevent their occurence would be for those accidents to be investigated through a no-blame accident investigation process, including the ability to access data from the vehicles involved."

The organisation said this would also help ease the introduction of autonomous vehicles into society by showing the community the right safety investigation frameworks were in place prior to widespread adoption.

Its recommendation follows the suspension of Uber's driverless car trials in the US after one of its vehicles crashed on an Arizona road.

Another car - not autonomous - failed to yield to the Uber vehicle while making a turn. Neither of the two human 'safety drivers' in the car at the time were hurt.

Last year, one of Google's self-driving cars similarly hit a bus when trying to go around an obstacle in California.