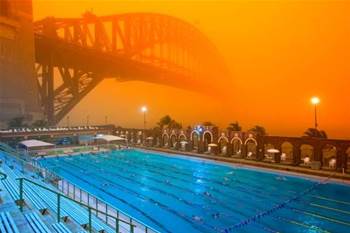 Linked gallery: Inside Sydney during the red-dust storm

At least two major firms - Optus and CBA - confirmed false alarms had been set off in Sydney facilities due to high winds and dust particles in the air.

But all reported they had come out largely unscathed from the storm, one of the worst on record.

Macquarie Telecom's managing director, Aidan Tudehope told iTnews the firm had "not experienced any adverse effects from the dust storm and [we] don't anticipate any".

But he confirmed the centre had undertaken a number of precautions. These included shutting off external mechanical ventilation systems to prevent dust entering the centre and placing staff on heightened alert.

"The alarm system remains fully operational and should an event be detected, it will be responded to in the usual fashion and a decision made to release the gas based on confirmation of a positive alarm," he said.

Frank Crawford, ac3's manager of technology and infrastructure said it had "reduced the access to our data centre through our loading dock area, as opening the doors may allow dust to leak through".

Crawford also said the company would be forced to clean its air-conditioning condensers, which are used for heat exchange, "in the near future - probably within a week [because they] operate far less efficiently when coated with dust".

Data centre operators in Brisbane posted similar stories of air filters and heat exchangers in need of cleaning on the AusNOG list.

An AAPT spokeswoman said the telco would be "checking air conditioning [and] water filtration units" in the wake of the storm as part of routine preventative maintenance.

"We were on standby as a matter of course, given the storm warnings last night but didn't experience any issues," she said.

Across town, manageNET chief technology officer Con Dalamangas said his major concern "was the impact of dust storm on our VESDA [fire] system and the air conditioning.

"The filters on our dual computer room air conditioning units are internal within the building. We don't use water cooling, and the condensers on the roof are completely sealed (gas heat exchange only) which has minimised the effects of the dust on our air conditioning equipment for the data centre floor," he said.

The Commonwealth Bank of Australia's executive general manager of enterprise services, Nick Holdsworth, reported "a couple of false alarms but otherwise no issues at our sites today from the dust storms".

Equinix Australia managing director Darren Mann said there had been no customer visits to the data centre as a result of the storm.

Mann said the facility had changed the sticking mats at entrances more frequently to catch any dust off pedestrian traffic moving in and out of the suites.

Air conditioning vendors were also on-site to conduct visual checks of the air filters, he said.

Spokespeople for Telstra and Optus told iTnews the dust storm had no adverse impact on their respective telecommunications networks.

But Telstra saw a 41 percent increase in the volume of MMS picture messages sent between 5am and 1pm today compared to an "average Wednesday", indicating interest in sharing storm photos.