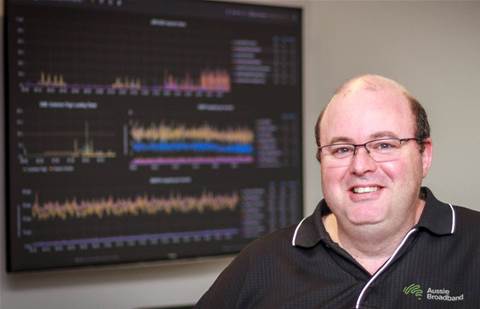 A late push on NBN Co’s ‘focus on fast’ discounts, combined with its sales strategy, may lead more Aussie Broadband users to stay on the higher-cost plans once the discount period ends, the company's managing director Phillip Britt says.

Speaking to iTnews after Aussie Broadband handed down its fourth quarter results, Britt said the retail service provider (RSP) had ultimately taken a different approach to the six-month discount campaign.

NBN Co’s ‘focus on fast’ campaign kicked off in February, making all tiers 100Mbps and above cost the same at a wholesale level for six months.

Because the larger plans also came with additional connectivity virtual circuit (CVC) bandwidth, some RSPs upgraded temporarily customers en masse to the higher speed tiers as a free speed boost, while potentially benefiting by having to pay less in excess CVC charges.

Though there were initial concerns that Aussie Broadband may not benefit from ‘focus on fast’, it appears the company was able to come up with an effective strategy to take it to market.

“I think we’ve managed to hold our own in the end,” Britt told iTnews.

“The strategy we took was to try and move customers organically into those plans so that there was a greater chance at the end of the promotion period that they’d actually stay on those higher speed tiers, whereas most other providers did a ‘free upgrade’ kind of option.

“My guess is you’d expect to see those customers will probably move back in the end because they weren’t really looking for [the higher speeds] anyway but they’ll accept the free promotion and then go back.”

Aussie Broadband effectively road-tested a customer’s willingness to pay more by offering a temporary discount on their standard pricing for a higher tier service.

“Basically we provided a discounted offer for them to try, but there wasn’t any obligation for them to take the offer, and so they chose to go up [to a higher tier],” Britt said.

“I guess if they enjoy the speeds then they’ll potentially stay.

“We had a discount to the normal price but it was still a price shift from their original plan, and so it was part of that education piece: here’s something to try, it’s a discount to where we would normally be, but it’s still a little bit more than you’d be paying on your current plan.”

Britt said that Aussie Broadband also made many of these targeted upgrade offers late in the ‘focus on fast’ campaign.

“Through late June and July we ran some fairly targeted campaigns, both towards existing customers and new customers, around those plans,” he said.

“That worked for us because in the early stage, everyone was in-market [competing], whereas in the later parts of the promotion, a lot of those offers had dropped off, and so coming in late sort of reinvigorated a new round of customers looking at it.”

With customers upgrading late in the piece, the push would also mean any CVC windfall from the campaign is delivered to Aussie Broadband much later than for providers that made large-scale free upgrades for their customer base back in February.

“We’ve pushed our [CVC boost element], in effect, into a later period where perhaps it’ll be more needed, as opposed to taking it at an earlier stage,” Britt said.

“The CVC boost part relates to when those customers are there, and for a six month period, and so because a lot of providers moved them fairly early in the piece, they’ll start coming off their CVC boost credits perhaps earlier than what we would.”

If it eventuated, this would be handy in offsetting excess CVC costs incurred due to increased internet usage during lockdowns, Britt added.

As parts of Australia go in and out of lockdown due to the rise of the Delta variant of Covid-19, RSPs say that internet usage is spiking, and so are their excess CVC costs to keep internet services performant, especially during peak periods.

RSPs had lobbied NBN Co for relief, similar to what was provided last year. However, after NBN Co rebuffed their attempts, the top five RSPs took their case to the government, and got a concession of sorts in the form of a single month of credits.

NBN Co has refused to offer further relief, in part because it argues traffic hasn’t risen by nearly as much as RSPs say it has.

NBN Co last week claimed that only it had “the full picture on daily data demand”, implying RSPs were mistaken.

Aussie Broadband’s Britt believed the discrepancy was the result of looking at CVC use on a national rather than individual CVC level.

Under NBN Co’s network structure, RSPs may have one or more CVCs to each point of interconnect (PoI), which is the point at which their network connects to the NBN.

Britt said that an individual CVC level view provided better perspective of traffic increases in areas that are under lockdown.

“The problem is most people - and certainly NBN Co has done this in the past - look at the data usage in aggregate at a national level, and when you actually break it down to a per-CVC level, and we’ve got more CVCs than there are POIs because you can only put so many customers on each CVC, you start to get inefficiencies,” he said.

“You’ve got to have headroom in each CVC so that people can get their peak time speeds. The common example is you have 10 percent sitting around, but in reality it’s probably more than that in some locations.

“The lockdowns do change that profile quite a bit, and particularly tying in events like the Olympics where people are spending a lot more [time streaming], that doesn’t help.

“Whilst I accept that the [CVC] inclusions are done on a national bundle basis, I think the amount of extra headroom being taken into account in the logic perhaps isnt sufficient, and that’s where it starts to become more difficult.

“There’s some efficiency with scale, but even at our scale it’s very hard to manage and keep on top of.”

In the fourth quarter FY21 results, Aussie Broadband said it expects to see “increased CVC overage [excess fees] in this market” as a result of the lockdowns.

“Customer utilisation in some areas peaked 24.5 percent higher in July than the month prior when they were not in lockdown,” the company said.

“As a result of the rebate, we expect July’s CVC overage expense to be over budget, but not materially.”

With RSPs and NBN Co still disagreeing over the CVC construct and extra charges, it brings into sharp focus efforts led by the Australian Competition and Consumer Commission (ACCC) to renegotiate the terms of the special access undertaking (SAU) with NBN Co - and NBN Co’s wholesale pricing with it.

Pricing and customer service dominated early talks, but so did RSPs’ desire for some sort of meaningful interim change to NBN Co’s pricing, given the SAU process could drag on for a while, if past attempts to renegotiate it are anything to go by.

“The SAU process could drag on for another 18 months to two years,” Britt said.

“The problem [with pricing] is going to come far sooner than that and so we need to see more movement, whether that be some interim changes.

“I’d prefer not [having] promotional type rebates like ‘focus on fast’. I’d probably prefer something more direct - like here’s a change to the bundle inclusions if that’s what we need to do.

“I think there’s definitely going to need to be some more work done before the SAU process rounds out.”

NBN Co is continuing to use discounts to try to solve the problem of its pricing - likened to “sugar hits” by other RSPs.

Britt noted the endless stream of discounts “doesn’t provide certainty for the industry.”

“I look at it like they’re small bridges that NBN Co tries to build to basically keep kicking the can of the real underlying problem down the road and to buy more time,” he said.

“I’m supportive of things that help build the bridge but I just hope that the bridge gets to the other side of the river much quicker than what it probably is.”

Overall broadband connections came in at 400,848, with gains made in both residential and business segments.

However, Britt noted that the business market is fast becoming a major growth vehicle for the company.

“Business is growing well and it’s absolutely a key focus for us,” he said.

“We sort of see residential as being business-as-usual these days and we’re putting a lot more focus into the business side.”

Britt said that Aussie Broadband’s Carbon platform would soon be home to many more products.

Carbon is offered to the IT departments of big businesses to ‘self-serve’ connectivity and IP phones, as well as to managed service providers to do the same for customers in their channels.

“We see Carbon growing quite a lot further than it already is,” Britt said.

“At the moment it’s predominantly NBN and hosted phone type products that are in there but we’ll be rolling out a whole range of other products that we sell to other channels in the coming months.”