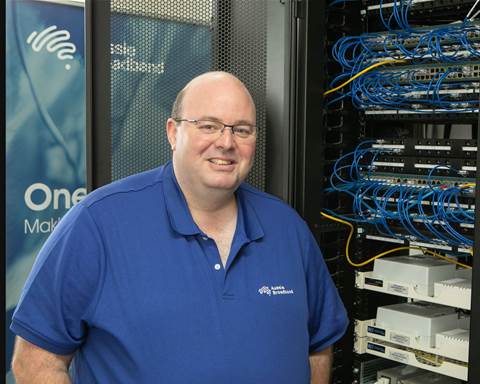 Accounts for almost three-quarters of sign-ups.

Aussie Broadband’s growth in residential broadband is coming largely from NBN users “disenfranchised” with their existing provider and looking to make a switch.

“Whilst the NBN main rollout is now complete, ultimately we’re seeing over 70 percent of our orders coming from people that are switching from other providers,” Britt said.

“These are people that are already connected to the NBN that are disenfranchised with their current provider for whatever reason, and so we’re still seeing strong connection orders even right through in January and now of customers that are switching providers.”

The churn to Aussie Broadband isn’t likely to be a surprise, insofar as the company was one of the first retail service providers (RSPs) to prioritise factors like user experience and service quality over price.

Early competition on the NBN was once characterised as a “land grab” by former NBN Co boss Bill Morrow, where he accused RSPs of sacrificing service quality to compete on price and sign up as many users as possible.

As the NBN retail market matured, so did the spectrum of offerings, and Aussie Broadband was able to emerge and grow by marketing higher quality as well as higher speed plans.

The company partially tested the limits of the service versus price trade-off at the end of last year when it increased its residential broadband prices.

“It was necessary to raise prices of our retail plans and we had forecast higher than normal churn during that period,” Britt said.

“Thankfully, whilst price rises are never well received, our churn was lower than expected during that period.”

“Connection churn averaged 1.9 percent average per month for the period,” Britt said, compared to a 2.1 percent forecast. Customer churn was 0.9 of a percent per month.

While the Australian broadband market remained extremely competitive, Britt noted that Aussie Broadband had shown that it could grow.

“If we look at the broadband services growth over the 12 months to December [2020], we’ve increased our NBN market share from 2.8 to now 4.2 percent, excluding satellite,” he said.

“That’s a significant jump in NBN market share, and we feel that there’s still more potential to run in that growth period.

“We’re still getting strong connections in the higher speed tiers which leads to stronger average revenue per user.

“We’re definitely winning in the performance front and taking good market share and demonstrating people want faster broadband, and they’re prepared to pay for it.”

“We have been able to achieve a lower cost to acquire than our target over the six month period,” he said.

“Our overall [marketing] spend was a little bit down - 16 percent under budget - but we actually still have achieved sales in excess of forecasts.”

One eye on acquisition targets

Retail consolidation under the NBN was always anticipated and to some extent has already played out previously, particularly at the larger end of the market.

Britt indicated he was keeping an eye on the RSP market as a potential way to augment the company’s organic growth.

However, he believed many potential targets were simply too small to warrant the effort.

“There’s 180-odd RSPs in Australia, probably a couple more than that, and a lot of the very small end of the spectrum we look at and go, ‘It really isnt worth it for us because we can put on 15,000-20,000 subs organically a month anyway’,” Britt said.

“Anything less than 50,000 is not really worth the hassle of doing an acquisition for.

“In the bigger range, 50,000-100,000 mark - they’re starting to get some scale but probably not enough that their margins are right, so that’s probably the sweet spot for us.

“We’re also prepared to look … bigger than that.”

However, Britt added that the company had yet to find a target it was interested in purchasing.

“We’re constantly reviewing opportunities in the acquisitions space,” he said.

“We haven't found any to date that would fit our profile in terms of what we’re looking at, but it’s not something we’re ruling out.

“We’ve also looked at funding options to fund that through debt as well.

“There’s opportunities out there. They’re definitely not all for us, but they’re things we’re considering.”

A stop-sell by NBN Co on new hybrid fibre coaxial (HFC) services, due to a shortage of chipsets used in network termination devices (NTDs), has raised attention to the silicon sourcing problems locally.

Aussie Broadband said that about nine percent of its orders each month could be impacted - based on January figures - equivalent to about 1800 new services.

Britt said Aussie Broadband had factored the stop-sell into its forward guidance, and expected being able to make up any temporary gap by selling more NBN services on other access technologies.

He also suggested that Aussie Broadband had seen the problems starting to form in its own supply chain ahead of time and made the call to stockpile customer premises equipment (CPE) it bundles with its own broadband plans.

“We’ve been carrying stock of the devices we use far in excess of what we normally would so that we wouldnt run out due to these chipset issues,” he said.

“But [there] seems to have [been] insufficient stock held on the other side.”

Britt also said that Aussie Broadband would boost its pre-sales capability for business orders, with a view to chasing more complex and valuable work.

“We’re looking to add further expertise in our pre-sales engineering function,” he said.

“Presently the majority of our business customers have relatively standard - what I would call vanilla - type setups.

“What we’re looking to do, and we have a couple of customers that have very complex needs, is further evolve our business team so we can handle a wide variety of large complex needs with tailored solutions because typically they bring much higher margins.

“That will become a focus for us over the next six months, as well as increased marketing into the business space.”