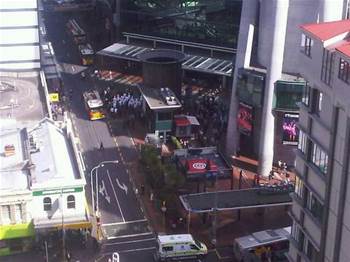 A fire that began in the communications room inside Auckland's Sky Tower has caused severe disruption to New Zealand telecommunications and data traffic today.

The New Zealand Fire Service evacuated the Sky Tower just after 1pm this afternoon [pictured], and locked down access to all of the building.

The fire was believed to have started in a generator located inside a communications room within the building.

Major telcos and ISPs such as Vodafone, Vocus, Kordia, Araneo and ICONZ were affected as the fire took out mains power to equipment.

ICONZ told its customers via Twitter that its equipment in the Sky Tower was running on battery-backed uninterruptible power supply.

Vocus told customers that there was a "fire in the comms room of SkyTower", that "all power to the building is currently off" and that equipment was "running on UPS [Uninterruptible Power Supply]."

Vodafone New Zealand was one of the hardest hit, with loss of 3G service for customers nationwide. GSM services however were unaffected.

Vodafone NZ spokesman Paul Brislen said signal was lost at around 1.40 pm but returned an hour later. Customer were unable to access the Vodafone website and SMS messaging was temporarily affected.

Other ISPs reported that mains power had been restored around 2.30pm and are reportedly checking the damage if any caused by the fire.

UPDATE - SkyCity's Peter Tracey has denied reports that the fire occurred in the Sky Tower itself. Instead, he says smoke was seen coming out of Sky City's plant in the nearby Federal Street, which prompted evacuation of the casino and the tower itself.

Asked how a fire in a nearby street could take out power for providers in the Sky Tower, Tracey speculated "it might have been due to a surge" but "wasn't sure."

The Auckland Sky Tower is a major communications point in New Zealand. It houses the Auckland Internet Peering Exchange and several wireless and fixed-line ISPs and telcos use the Sky Tower to house equipment and to connect to each other.