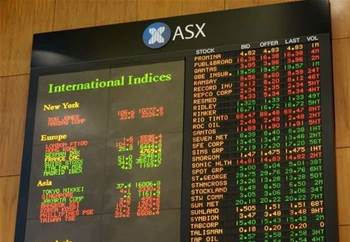 The Australian Stock Exchange (ASX) is building a $32 million data centre that it claims will deliver "near-zero" latency times for listed companies.

The facility will be built outside the Sydney CBD and provide extra co-location and backup services for the ASX, according to group technology executive Jeff Olsson.

The additional capability allows more customers to execute trades quicker because their trading systems and algorithms are situated directly alongside the ASX trading infrastructure.

It will also reduce the market impact costs, which make up the majority of overall costs of trading. The ASX reduced headline fees last week.

"When you connect up to your computer to the data centre, the network connection takes a significant amoutn of time to go from their computer to our systems," Olsson said.

"This build completely takes out the network component and allows much faster order and delivery for our customers because they sit [their servers] in our own data centre, which reduces latency. It's a very significant advantage.

"We already offer co-location capability. We're just expanding it out to offer customers more ability to use it."

Olsson was tight-lipped about the parties involved and the location as the detailed design of the data centre is scoped over the next four months, ahead of the August 2011 completion deadline.

"There are lots of ideas whether we can afford to implement themselves is the issue. [Environmental impact] is something we're going to consider."

"At the moment, we don't want to be too specific about where it is. It's outside the CBD, basically it's a piece of dirt at the moment, it hasn't had the foundations or anything else laid."

The data centre build will be done alongside a number of other technology updates.

Mr Olsson said the ASX is on track for the October deadline to implement a new ASX trade system, based on the Genium INET platform developed by American technology stock exchange NASDAQ.

The new system has an average latency of 250 microseconds and will increase daily trading capacity to over five million trades and 500 million order book changes.

Simultaneously, the ASX will also update systems to preserve the technological capability to trade equities and derivitives on the same platform, also due for completion by the end of the year.

The costs were not divulged but Mr Olsson said the wide range of products is rivalled by only a handful of exchanges around the world, a competitive edge which allows it to strongly compete in the global capital market.

"We're one of the few exchanges in the world that offers comprehensive from pre-trade, post-trade and trading facilties, we also provide clearing house services to the banking community.

"We have a bigger suite of products than any other exchanges and see ourselves as having a leadership position and have the technology to match."