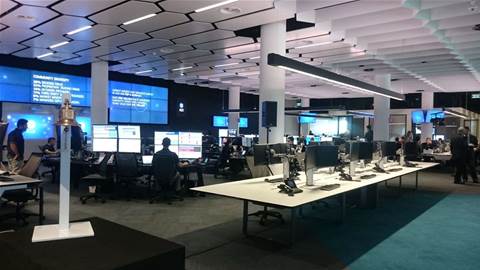 The Australian Stock Exchange has kitted out a new level in its $45 million Sydney Liquidity Centre to offer a centralised support operation servicing the exchange's entire customer base.

The ASX today rang the bell for the opening of its new 'customer support centre', located one level below its data centre in the Gore Hill facility.

ASX CIO Tim Thurman said the co-location of support in one floor would remove previous barriers to problem fixing that had existed at Bridge St.

"When a problem occured we'd have people running up and down floors and all over the place," he told iTnews.

"Now when there is an issue, it is visible to everyone on the screens and they can all congregate together at a [collaboration space] in the centre of the floor."

He said the IT team at Gore Hill also served the purpose of testing new products and services created by the project team in Bridge St.

Thurman and the team added new functionality to the ASX's Tibco market monitoring platform to allow support staff in Gore Hill to be automatically alerted when a client hasn't logged in to trade in the morning - enabling them to be proactive rather than reactive to issues.

Large screens cover the centre's front wall to alert staff to any problems as they arise.

To inform the design of the new centre, Thurman and CEO Elmer Funke Kupper looked at other exchanges and operations centres around the world.

They took lessons from Rio Tintio's Perth-based operations centre and decided against introducing the hot-desking implemented in Bridge St in favour of congregating teams together.

Technology, operations and surveillance each occupy a third of the floor, and can come together in a central meeting point when issues arise.

There are no desktops at the facility - staff are given the option of choosing from three laptops (a Surface, a ThinkPad, or a Mac) provisioned by Good Technology, which they dock into stations and monitors at their desk.

Staff are allowed in to bring in their own mobile phones - again using Good's MDM technology - or take up a company-provisioned and more locked-down Apple iPhone.

The new customer support centre brings the ASX's total level of investment in the Liquidity Centre to $45 million.

The facility - which houses the ASX's production data centre - opened in 2012.

Kupper today said the centre now has enough power to generate electricity for 5000 homes, and its UPS (uninterruptible power supply) technology means the centre can run at full capacity for five days without needing to refuel.

The facility is surrounded by 600 kilometres of cable, and the accumulated bandwidth equates to around three million megabits per second.

Around 100 of the ASXs customers are co-located in the Liquidity Centre.