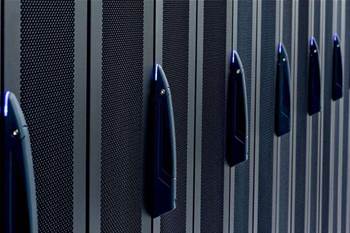 But half the leased cabinets remain empty.

The Australian Securities Exchange (ASX) has leased two-thirds of the co-location racks in its $36.5 million Gore Hill data centre, 14 months since the high-speed facility was launched.

The exchange began building the Australian Liquidity Centre (ALC) in 2010, after nearing capacity in its Bondi and CBD facilities and identifying a growing demand for co-location.

The revenue contribution of technical services, including co-location hosting and connectivity, has grown since the ALC's launch last February.

ASX chief information officer Tim Thurman told iTnews that about 200 of its co-location racks were generating revenue, although about half of them were empty, with customers paying a reduced price to reserve space to meet projected demand.

“Some of the racks here are empty but they’ve actually been reserved,” he said. “So someone is still paying for this … [pricing] is incremental.

“The clients buy in excess … when the market is busier, they put more technology in. When it slows down, they shut it down, pull it out.

“It’s supply and demand; if they want it on demand, there’s a cost associated with that. But if there’s nothing here, then it’s not drawing power.”

The ALC currently houses a total of four managed service providers offering smaller chunks of rack space to players who do not wish to rent a full rack from the ASX.

Nomura-backed managed service provider MarketPrizm, for example, shares its two ALC racks with overseas investment banks and high-frequency traders, and has three other racks on reserve.

Thurman said local high-frequency traders tended to lease up to three racks, whereas banks tended to take up more space to account for fluctuating demand internally and from customers.

Investment bank CIMB Securities moved all primary data centre systems to the ALC when it split from the Royal Bank of Scotland last year.

Thurman said one unnamed investment bank leased an entire row of 21 racks within the ALC. “They see it more as securing real estate to have all their technology in a single row, versus having their technology scattered all across the data centre,” he explained.

Latency has become a growing challenge for stock market technologists in recent years as market participants rely increasingly on algorithms to execute trades.

“It’s very important for our customers to be as physically close to our servers as they can possibly be — we know it takes about one nanosecond for light to travel one foot, and our industry cares about that,” he said at the time.

The ASX has attempted to level the playing field by connecting all ALC co-location racks to trading systems in a locked, high-density area by exactly 62 metres of fibre.

Thurman noted that the NYSE had a circular co-location room, with all customers located an equal distance from trading platforms in the centre of the room.

But the circular room was “more for show”, he said.

“With the equal-distance cable, it doesn’t really matter [where customers’ colocation racks are physically located within the room]. A lot of the technologists who come in understand that.”

ASX senior manager of market development and sales Paul Stonham told iTnews that some larger exchanges offered two lengths of cables – for example, 30 metres and 60 metres – with the shorter length priced much higher.

The SGX, for example, offers ‘tier one’ and ‘tier two’ co-location with less than 100 microseconds of round-trip network latency, as well as proximity hosting (800 to 1250 microseconds) and leased line or MPLS connectivity (6000 to 13,000 microseconds).

“Maybe five, ten years from now, colocation will be something totally different,” he said. “It’s going to keep getting closer, closer to the trading platform. How you accomplish that is going to be the question.”