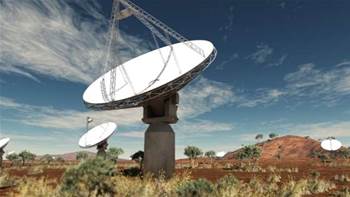 The chip was a joint project of the CSIRO and Australian company Sapphicon Semiconductor, which also developed mobile antenna technology for iPhone and Nokia devices.

It incorporated multiple radio receiver functions such as radio frequency, logic, mixed-signal and passive tasks to form a single 'system-on-a-chip'.

For the ASKAP, the chips would be used in 'phased array feed' systems that sat at the focal centres of each of its 36 dish antennae and received incoming cosmic radio waves.

But "any communications device" would benefit from the technology, he said, including mobile phones, satellites, and deep space probes.

"These are highly innovative circuit blocks that can be applied to other communications devices if developed for other markets," Brawley told iTnews.

"A sapphire substrate is not 'lossy'," Brawley explained. "That's important for an application such as radio astronomy, because it minimises losses in integrated passive components, significantly improving their performance.

"Perhaps the biggest advantage is that so much circuitry can be incorporated into the same chip," he said. "This is real miniaturisation and could open up whole new product markets."

International researchers developing the Square Kilometre Array radio telescope have expressed an interest in the technology. However, Sapphicon was yet to have commercial discussions about taking the chip beyond radio astronomy applications.

Currently, the focus was on developing the chip for the ASKAP, which would likely take about two years to complete, and involve a multi-stage, iterative process, Brawley said.

"We've got quite a bit of development work to go," he told iTnews. "We've done some prototype work and proved that it's very suitable for the radio telescope."

"It's really going to be a breakthrough in radio astronomy," he said.

Meanwhile, were the chip to find a place in mobile phones, Brawley said circuitry would be locked at the correct frequency to ensure clear transmission.

"It's not going to pick up aliens from space," he laughed.