Army calls on IT industry to keep it simple 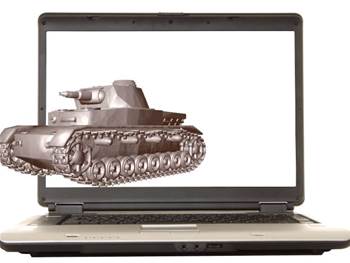 The Australian Army has called on IT vendors to consider simplicity a key design element when pitching technologies for battlefield use.

Sengleman said the Army was meeting the milestones on its 2009 NCW implementation roadmap, which called for a fully networked Defence Force by 2030.

But it was "all tapped out" on intelligence and ICT personnel, he said, describing challenges in tailoring new technology for its principle consumer: soldiers.

"I'm seeking solutions from the industry where a NCW capability is available to our soldiers but the network behind it is invisible to them," he said.

"iPhones exist, classified Blackberrys exist. This is not science fiction."

Rather than simply upgrading legacy systems, Sengleman sought interoperable, modular and sustainable systems that would improve -- not disrupt -- battlefield operations.

The Army had to balance its needs and wants, he said, describing U.S. technological capabilities available to Australian soldiers in Afghanistan that would not be available locally.

New network capabilities were also creating a demand for more information analysts and intelligence personnel at company, battalion and brigade levels, he said.

"All too frequently, the focus is on sensors and platforms; those don't work without people."