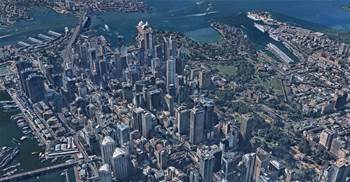 Taps Nearmap for compliance and context.

The Melbourne-based studio with over 350 employees across Australia and New Zealand, began using the ASX-listed data provider’s platform, not just for accurate measurements of the landscape, but to add a greater sense of context to its projects.

Manager of building information modelling (BIM) and principle at Architectus, Steve Fox, said that while 3D modelling itself isn’t new to the industry, 3D visualisations of aerial imagery serve as a “complementary workflow” to other technologies like digital twins (virtual maps of important assets and data flows).

He told iTnews that using highly-accurate 3D aerial imagery helps both the designers and clients visualise existing conditions at a site and how new structures will fit in with - or stand out from - the surrounding city. 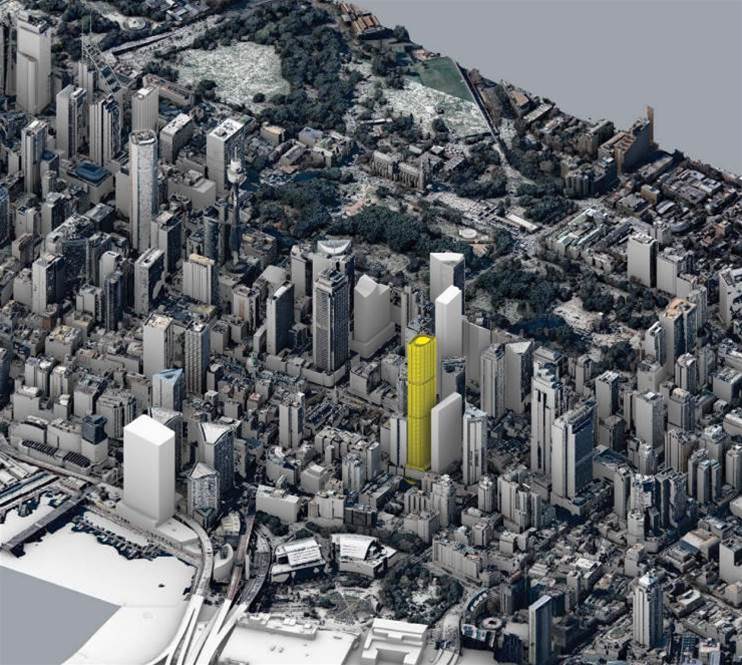 Architectus' project at 505 George Street in yellow standing out against the rest of Sydney. Source: Architectus

While the design studio works across a number of different sectors including urban design and commercial and residential properties, certain projects naturally benefit more from 3D visualisations and the geospatial data, Fox said.

“Our urban design team are very keen and our residential, commercial teams, and even rail - being able to review rail corridors and things, it becomes really valuable.

“Certainly it’s utilised most effectively at the front end of the project, you know, at that design stage where we really kind of find contextualised information and present that in ways where we would have struggled otherwise.”

And unlike other geospatial imagery providers like Google Earth, Nearmap updates its imagery at least once a year - meaning the designers at Architectus and their clients can see how the cityscape is evolving and development on longer projects is progressing.

Ensuring new projects in the crowded inner-city and CBD adhere to strict regulations and don’t tread on neighbours’ toes can be a tough gig.

“There are a lot of compliance measures, with regulations to observe around height, access to solar, and distribution of views,” Fox said.

“We do shadow analysis over winter, to see the impact of the worst scenarios; we analyse access to daylight on residential buildings - this is a highly sensitive area where you have to provide a percentage of habitable spaces within apartment complexes.

“It’s not just about the old way of doing things, looking at a mapping platform and extruding boxes and anticipating the heights; it has to be much more rigorous now.”

The accuracy of the geospatial measurement data from Nearmap means Architectus can quickly justify its proposals to council, accelerating the decision making and approval process.

“What it's really forced us to do is to actually go back and assess some of the previous work actually, if anything,” he added.

“We've actually been able to say, okay, we're so happy with the accuracy of this, we'd like to just go back and make sure that, with the previous schemes in terms of compliance, we've actually have recorded [all of] that.”

However, in a firm with 350 staff, making the tools and knowledge on how to get the most out of them is a challenge.

So far Nearmap’s services have been used on five projects at Architectus, with another 10 on the boil at the moment.

“Whenever we bring in new projects, particularly around urban areas, we’ll introduce this workflow.

“And part of the implementation curve for us is training our staff and getting them up to speed with the technology and making it part of their workflow, which is often the biggest barrier to technology in an organisation like ours.

“I’m confident we’ll get that more mainstream within our business so that every project, ideally, we would have a testing ground with some overlayed Nearmap data.”