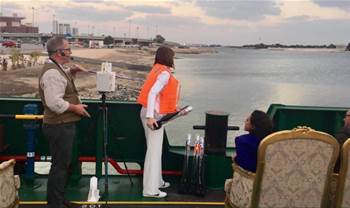 The ASX-listed company, which also has a base in the US, can count the modest $10,000 grant as another addition to its growing trophy cabinet, having already received support from, and formed partnerships with, several international defence groups including Thales and the US Navy.

Aquabotix bills its autonomous swarm of drones as tools for a range of activities including harbour management and security, intelligence reconnaissance, mine and unexploded ordnance detection, hydrographic surveys, and “stealthy data transfer”.

And, since being granted a US licence to do so in October, Aquabotix can also be a tool for “disruption through explosives delivery”.

DIN’s grant will allow the company to work on developing its controls systems for implementation in its autonomous vehicle’s next iteration, following end-user feedback from a series of trials in Australia and the US.

Though still in development, the small drones are already able to operate in open water or the rough and tumble of the surf, and can be rapidly deployed from docks or vessels with a not so gentle toss overboard.

Aquabotix CEO Whitney Million said in a statement to investors that the “modest” funding boost “is indicative of the fact that various governmental end-users recognise the uniqueness and need for our products”.

“The concept being developed using these funds will enable greater versatility for our unmanned underwater and surface vehicles in defence operations”.