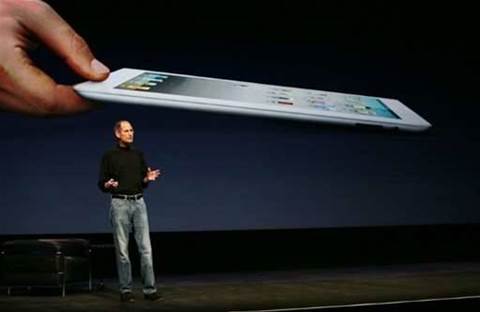 Apple has revealed prices for its iPad 2 tablet will start at $579 for the 16GB Wi-Fi model when the device goes on sale this Friday.

The second-generation tablet – which contained front and rear-facing cameras, a new chip and new operating system version – was released to US customers about a fortnight ago.

It was due to go on sale in Australia at 5pm Friday.

The new smart covers for the device would cost $45 for the polyurethane and $79 for the leather versions respectively.

Apple's rivals announced a flurry of new devices after the iPad 2 in a bid to ride the renewed interest in tablet purchases.

ViewSonic said today its ViewPad 10s tablet would be sold through retailer Harvey Norman in Australia for $599.

Samsung's Galaxy Tab 10.1, meanwhile, was due to land in Australia mid next month for $729 outright. It would initially be available only through carrier Vodafone.

And RIM revealed today its PlayBook device would start at US$499 when it appeared in US stores next month. No release date was revealed for Australia.

"The North American tablet market looks fiercely competitive this year – with Samsung's 8.9-inch Galaxy Tab and Motorola's Xoom lining up alongside the iPad 2 – so RIM may have trouble selling the benefits of its device to consumers, especially given the content and application onslaught from Apple and Google," he said.

"As with BlackBerry smartphones, the PlayBook's strongest hand looks to be in its business system integration, which is where we expect to see its greatest success in the near term."