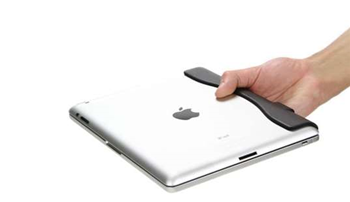 Bluetooth-enabled keyboards that compensate for the iPad’s soft keyboard are nothing new, but non-Apple hardware makers have developed solutions that hybridise iPad cases with a tangible keyboard.

A keyboard case that launched Wednesday called Brydge is seeking US$90,000 in funding on capital raising website Kickstarter.com and has attracted 466 backers, just days after Cook compared converging the two device-types with blending a “toaster and a refrigerator”.

In Cook’s view, to attempt such a feat would involve so many trade-offs that it would not please anyone.

Mac specialist news site 9to5 Mac points out that an earlier released “NoteBook Case” does a good job of converting an iPad into a lightweight MacBook for a cost of €85 (A$108), giving it a USB port and additional battery power at an addiitional weight of 620 grams.

The kicker Brydge offers is “aerospace-grade aluminum” with optional speakers that is aesthetically consistent with the Apple’s iPad craftmanship.

Like Apple’s additional A$45 polyurethane protective case, Brydge magnetically attaches to the the iPad, but is about 400 grams heavier than Apple’s own protective cover, whcih weighs in at 141 grams.