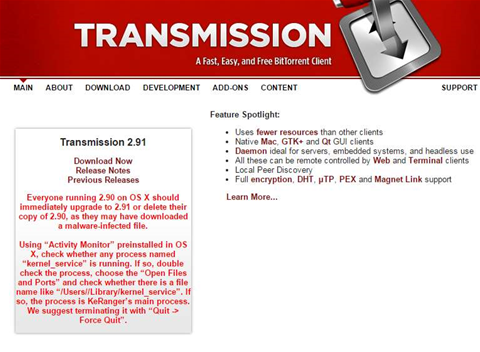 KeRanger first malware of its kind.

The first known ransomware targeted at Apple's Mac computers was only downloaded about 6500 times, according to a representative for the Transmission project, whose software was used to launch the attack.

Transmission representative John Clay said the ransomware was added to disk-image of its software after the project's server was compromised in an attack.

"We're not commenting on the avenue of attack, other than to say that it was our main server that was compromised," he said. "The normal disk image [was] replaced by the compromised one."

He said security on the server had since been increased and the group was in "frequent contact" with Apple as well as Palo Alto Networks, which discovered the ransomware.

It's the first campaign of its kind against Apple computers. At this stage, it is not known how many systems have been successfully attacked by the malware.

Apple acted swiftly after learning of the malware, revoking a digital certificate from Transmission, a legitimate Apple developer, that enabled the rogue software to install on Macs.

The malware was programmed to encrypt files on an infected device three days after the original infection.

Transmission is a popular Mac applications used to download software, videos, music and other data through the BitTorrent peer-to-peer information sharing network.

Ransomware encrypts data on infected machines, then typically asks users to pay a ransom to get an electronic key so they can retrieve their data. It is usually targeted towards users of Microsoft's Windows operating system.