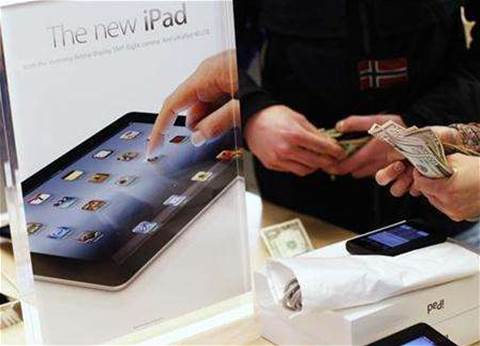 No longer just preserving its cash.

Apple CEO Tim Cook has fulfilled a longstanding desire of investors by initiating a quarterly dividend and share buyback that will pay out $US45 billion ($42 billion) over three years.

The world's most valuable company will start paying its first dividends since 1995 - a regular quarterly payout of $US2.65 a share - in July, and buy back up to $US10 billion of its stock beginning in the next fiscal year.

The $US10 billion annual dividend program, which Cook said will be reviewed periodically, ranks among the largest current US corporate cash payouts.

Yet it disappointed some fund managers, given the immense war chest Apple boasts, and a 1.8 percent dividend yield that lags the Standard & Poor's 500 average.

Cook told analysts on Monday that "making great products" remained top priority, echoing the sentiments of his former boss, who died last October after a long battle with cancer.

Steve Jobs' former lieutenant has impressed Wall Street since taking the helm. He made his mark revealing Apple's production partners and initiating investigations into allegations of labor abuse in its supply chain, and addressing investors directly at this year's Goldman Sachs conference.

But the question of whether the operations maven can envision revolutionary products still lingers for some.

Cook's move came less than a year after he was appointed head of the company and suggested to many a move away from Jobs' era, when a dividend was often mentioned but not acted upon.

Under Jobs, Apple maintained that capital preservation was key and the company needed the flexibility of having a cash pile.

"Already we are seeing more openness, and more willingness to address issues on many different fronts under Tim Cook than we had seen in the past," said Connor Browne, portfolio manager of Thornburg Value Fund.

"While all this other stuff is good, there is still some pressure on management to come out with fantastic products over the coming months," he said.

Apple shares were up 2.2 percent at $US598.33 in afternoon trading. It came within a whisker of its lifetime high of $US600.01 before falling back.

When Cook was announced as CEO of one of the most highly recognisable brands, Wall Street feared he lacked Jobs' uncanny vision for ground-breaking consumer electronics.

But Apple's shares have gained more than 50 percent since Jobs' death and set a record above $US600 last week as investors noted the assurance with which Cook has taken the reins.

Within company headquarters at 1 Infinite Loop, there remains a sense of urgency despite the success, former Apple executive and venture capitalist Jean-Louis Gassee said.

Cook "was part of what made Apple such a juggernaut when Steve was running the show," Gassee said. "He now follows Steve's advice: Don't try to be me, be yourself."

Michael Holt, analyst with Morningstar, said Cook was "putting his own slant on things" but some of the company's core areas, such as product development, have not changed under him.

"The influence of Steve Jobs is very heavy on not only the current products, but also products that are in the pipeline," Holt said. "So it's kind of a balance."

Cook, a former IBM executive and Apple long-time chief operating officer, oversaw the rollout of the iPhone 4S last year and presided over what he said on Monday was a "record weekend" of sales for the new, 4G-enabled iPad.

"Innovation is the most important objective at Apple and we will not lose sight of that," Cook said during the rare late-quarter conference call.

Many investors now await an Apple TV or a similar device: a gadget that will transform an industry the way the iPhone did. On a conference call, one of the first questions that cropped up regarded the product pipeline. Cook declined comment.

"One of the risks with Apple in particular is that they have very little in recurring revenues. Most of the revenue is new sales, which means that innovation is absolutely critical," Oliver Pursche, manager of the GMG Defensive Beta fund."

"That's one of the reasons that the PE is so low."

The company's pipeline - which experts say Jobs put in place before his death and will last the company for years - seemed to be going strong. AT&T said on Monday it racked up a single-day record last Friday for new iPad activations.

Wall Street had expected strong numbers and took that news in stride, as it did the largely anticipated dividend.

Analysts said the initiation of a regular payout would attract a broader investor base, but added that many funds had already piled in on hopes of a dividend, after Cook said this year there were active discussions at the top level about what to do with its $US98 billion hoard of cash and securities.

"A lot of mutual funds that say they're buying dividend companies had Apple in them. That shouldn't be, but I guess it was obvious that after Tim Cook spoke last time that this was the case," said William Lefkowitz, chief options strategist at VFinance Investments.

Apple expects the share buyback program to run over three years, with the primary objective to offset the impact of employee stock options and equity grants.

Its annual dividend yield will come in around 1.8 percent. That ranks above Oracle and IBM but falls just short of the average of around 2.4 percent for companies in the Standard & Poor's 500 index .SPX, analysts say.

The company will still maintain a "war chest" for other strategic opportunities, Cook said. "These decisions will not close any doors for us."

The maker of the iPhone, iPad and iPod has $US98 billion in cash and securities, equal to about $US104 a share.

Apple said it anticipated using about $US45 billion of domestic cash in the first three years of its buyback and dividend programs.

Asked about the substantial cash Apple has parked overseas, chief financial official Peter Oppenheimer said the company had no plans to repatriate it at this time.

"The current tax laws provide a considerable economic disincentive to US companies that might otherwise repatriate the substantial amount of foreign cash that they have," he said. "That's our view. And we've expressed it. "