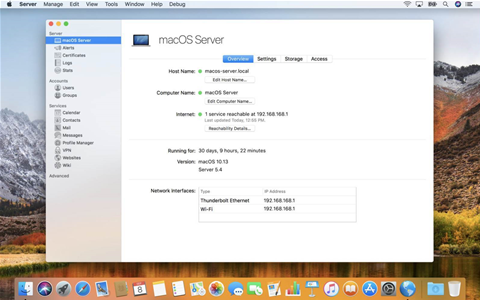 Apple will take the axe to a large amount of essential network services provided by its macOS Server product this year.

Basic services to run networked computer systems on macOS Server, such as dynamic host control protocol and domain name system, will be deprecated this year, Apple has revealed.

Software provisioning and remote system installation services via Netinstall will also go, as will the macOS virtual private networking server and calendaring, contacts, messages, and web and wiki sites.

The services will be removed in an unspecified future release of macOS Server, Apple said.

If the services have been configured on macOS Server already, they will remain usable in the next version of the software that is due out after March.

Apple suggests users who rely on the services consider replacing them with open source alternatives, like KerioConnect, Dovecot/Postfix and Courier in place of the macOS Mail service.

"macOS Server is changing to focus more on management of computers, devices, and storage on your network," Apple said.

Its market share has remained small - just 0.34 percent - with most users being in higher education and software development and IT services, analyst firm iDatalabs found.