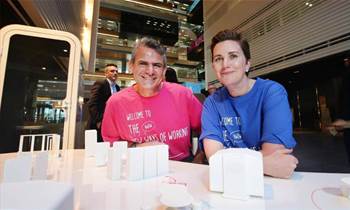 ‘New ways of working’ might be all the rage among corporates racing to re-brand themselves as agile, but at the ANZ Banking Group it seems ‘new ways of talking’ are now being put through their paces, with technologists getting coached in the use of plain English.

ANZ’s group executive for technology, Gerard Florian, has revealed his troops, senior and junior, have been sent to storytelling boot camp to develop their narrative skills so other parts of the bank and customers can understand them, with slide decks thrown out for ‘one-pagers’.

In a candid and forthright assessment on ANZ’s corporate blog Blue Notes, Florian reckons that, predictably, “technicians like technology” the way they communicate sometimes suffers because “they often can’t express the solutions because they are not typically good story tellers".

The other comms strategy

It’s a problem that’s holding back the tech profession, Florian says, arguing that technologists need to quickly sharpen their words “if they want to create value for the organisation.”

Or just get people to pay attention rather than drifting away.

“Technology teams need to be heard and understood,” Florian said, noting that for all the talk of data, it’s the delivery of the ideas behind the numbers that generates cut-through rather than just patterns or correlations.

Justified or not, the stereotype of IT teams dependent on lengthy, eye-crossing and deeply unmemorable decks crammed with technical detail is of course one of more well-worn images of geek culture, especially when it comes to detailing architecture, processes and workflow.

The nub of the problem, as Florian describes it, is that there are often too few common words, terms and mutually acknowledged facts to articulate a “clear vision and change story” that stay relatively consistent and are genuinely born of business and customer needs.

“Our technology department needs clear, plain English narratives that connect. We need to deliver again and again. We must evolve - but not change everything too often,” Florian says.

“This is where stories are important. Humans respond to stories in a way they simply don’t to raw, untreated data.”

(The same observation could be made of many lines of business that over decades develop their own ‘speak’ and shorthand that’s largely unintelligible to outsiders – like the stock banking terms NIMs (net interest margin) jaws (income vs expense) and any number of international compliance regimes that make European cities sound more boring than they really are.)

Florian also candidly concedes that rampant overuse and appropriation of certain tech words that have been co-opted well away from their initial contexts gets a bit, ah, naff for everyone, right from the top down.

“ANZ has been undergoing significant change since Shayne Elliott was appointed chief executive in 2016,” Florian says.

“Transformation is overused these days but the changes we are in the midst of cut across our business model, our geographic reach, our technology and, most importantly, our culture.”

Elliot, so far, is the only CEO of a Big Four Bank in Australia who hasn’t their career path rerouted by a major regulatory scandal.

That said, some of ANZ’s earlier agile-meets-automation efforts dented its mortgage book by enforcing rules so strict it bled residential lending business to rivals.

In May 2019 Elliot revealed ANZ was easing the rapid expansion of new ways of working, conceding at the bank’s interim results it wasn’t working everywhere.

Much of ANZ’s trumpeting of transformation culture – and the tech language it uses – has been contributed by the Australian software development phenomenon that is Atlassian, which markets its ability to foster collaboration through its tools and cultural playbook.

In a notable role reversal between tech buyer and supplier, it was ANZ and Florian in 2018 that strongly talked-up the “strategic partnership” it had forged with the NASDAQ-listed maker of Jira and Confluence and now owner of Trello – rather than the vendor doing the crowing.

“We are already well into our agile transformation at ANZ and working closely with Atlassian will help accelerate our progress in continuing to turn a 180-year-old organisation into a workplace for the digital economy,” Florian said at the time.

As users of Jira will attest, the use of ‘stories’ – essentially a development chunk – is a pretty fundamental in the overall Atlassian experience and the way it gets people to articulate their ideas.

Creating a common set of words to develop and tell those stories also goes a long way when it comes to getting stakeholders on the same page too.

Florian also reckons you really only need one page that nails it too.

“When it comes to building a clear vision and change story, there is one element which I have found very useful. It is the “strategy on a page”, laying out our entire change story in a single narrative,” ANZ’s tech chief says.

“Not revolutionary, I know, but such a document does help to clarify to everyone the direction we are taking and how we are contributing to ANZ’s purpose.”

If short stories, one pagers and plain English help ANZ articulate what it wants to do internally, its board members (David Gonski is its chairman) appear to lean to the graphic expression of ideas when it comes to technology.

According to Florian’s latest missive, ANZ’s board “requested a view of the total technology real estate needed to enable conversations” that seems to have become a one pager on steroids.

“It has evolved somewhat but the principle is simple: get all of the real estate on to one page so people can roughly understand how the components are inter-related,” Florian noted.

“This can then be overlayed with factors like budget, spend, talent, risk etc.”

And while creation of the enterprise mud map wasn’t easy, Florian says it’s paid off in the end.

“I concede this was a real challenge but a very worthwhile one as it has become a frequently used tool,” ANZ’s tech chief said.

“The technology canvas provides clear attributions across the business and enables meaningful conversations with the board and leadership.”

Knowing – and wanting to know – where a bank’s cultural and technological issues could be lurking is a conversation bank boards are increasingly having as regulators increase the pressure for more frequent and fulsome disclosure.

And while Florian acknowledges it’s been a long road, the destination is in sight.

“While we have been working hard on this since 2017, I would still say it is early days. We have spent a lot of time getting the foundations in place and hope to see the real impact on the business start to manifest itself this year,” ANZ’s tech chief said.

“That will be a good story.”