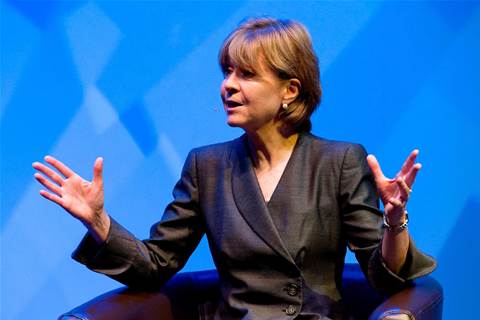 Hosted offshore - from whose perspective?

While ANZ’s Australian competitors talk up public cloud services, the “super regional” bank is wrestling with 32 regulators around the world to build out an efficient private cloud.

Chief information officer Anne Weatherston has spent the past three years building out a globally consistent approach to people, process and technology from what was essentially two separate banks in Australia and New Zealand.

The goal, she said, is to provide a seamless experience to any customers moving between its 32 geographies.

ANZ is working towards running on a total of three core banking platforms – one in the Pacific region, one in Asia, and one for Australia and New Zealand.

“We’re building a global approach to how we do payments, how we do integration, how we handle our data,” Weatherston told iTnews on the sidelines of the Gartner Symposium this week.

“If you were a customer of ANZ and it just so happens that you moved to Singapore, what we want is that it doesn’t matter – you’re still recognised by ANZ regardless of which region you’re in.”

Weatherston’s technology team has spent the past year virtualising 40 percent of ANZ’s IT infrastructure, with a view to hosting 80 percent of its services in a private cloud by 2014.

The bank will shortly begin deploying a Teradata data warehouse to improve its view of Australian customers and assist with credit risk calculations.

“We’ve got 32 regulators all demanding evidence that customer data is secure,” she said.

“The regulators are kind of working against our desired customer experience although they would argue that they are working for the customer, in terms of security.

“Increasingly, what we’re finding in Asia is the Asian regulators are coming out and demanding that there’s in-country data centres and in-country data.

“Singapore is leading the pack … Indonesia has literally just come out and announced the same, and Taiwan has announced an intention to go the same way.”

ANZ currently operates six data centres globally, including two in Australia and one each in New Zealand, Singapore, Indonesia and Taiwan.

Weatherston acknowledged that running a data centre in each of its geographies somewhat diminished the efficiency gained from the private cloud model.

But “as long as the business wants to go into a country then it’s non-negotiable; we’d have to accept that,” she said.

“The real issue is about the commercial impact, in terms of, can you afford to operate in all countries,” she said.

“Singapore will be an important market for us, but you may say with a smaller one like Laos, [we would not] go there.”

ANZ has also taken the heat for its global staffing decisions, with the Finance Sector Union last month reporting that the bank had sent a total of 3134 jobs – including non-IT roles – overseas since 2007. (pdf)

ANZ currently employs 4000 IT workers in Australia, 800 in New Zealand, and 2000 in Bangalore, India, and is in the process of establishing a centre in Chengdu, China.

Like Westpac CIO Clive Whincup, Weatherston has pinned ANZ’s offshoring decisions on an Australian skills shortage, rather than labour arbitrage.

“ANZ, for a long time, has had an IT centre in Bangalore. When I joined the bank three years ago we had 1500 IT people in Bangalore. They are all ANZ employees,” she said.

“I don’t think it’s all about cost … our strategy is really to put the IT activity where we believe the skills and capability exist. That may be anywhere in the entire world.

“There’s around 5000 IT graduates coming out of Australian universities every year. Apparently Australia churns out more personal trainers than IT graduates.

“Contrast that with Chengdu – four universities there churn out in the region of 80,000 IT graduates every year.”

Industry commentators like the ACS Foundation’s executive director John Ridge have criticised the offshoring of low-level IT jobs as a short-sighted move that would exacerbate an Australian skills shortage.

Weatherston acknowledged that there was a disconnect between entry-level positions – traditionally the first to go overseas – and executive positions that tended to stay in Australia.

She hoped to address the issue by promoting mobility within the ANZ Group – hiring and deploying people regardless of location and up-skilling and moving them when required.

“We’ve now built a database of every single IT person in ANZ,” she said, describing the result of a two-year body of work.

“It doesn’t matter where they sit. We know who they are, what the skills are and what they’re working on at any given time.

“We now need to create a global framework, where it’s not just about knowing them; it’s also about developing them.”

Weatherston told iTnews that ANZ “regularly [moved] a lot of Indian developers into Melbourne”, of whom “quite a few” had stayed and accepted Australian citizenship.

Some Australian graduates had also taken up overseas postings in Singapore, she noted.

“I’m trying to keep a closer eye on the graduates personally,” she said.

“What I’ve been saying to the graduates is if you’ve been in the same position for 18 months, you need to start shouting. You need to get in, develop, move.”

“We’re starting to create movement across all of technology,” she said.