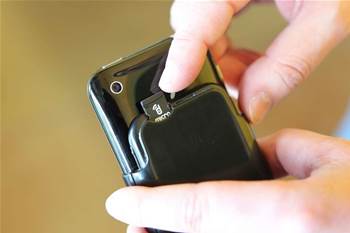 ANZ Bank has teamed with Visa to trial a new iPhone case that turns the Apple smartphone into a mobile wallet - the first local trial of its kind in over three years.

About 50 staff from the two companies were provided phones with the “special protective case” made by DeviceFidelity.

The case incorporated a microSD card which hosted Visa’s contactless payment application, payWave and a prepaid ANZ account that could be topped up using the internet.

Staff members could buy items under $100 simply by swiping their phone against a payWave reader in a retail store - “no PIN or signature required”.

Visa had previously conducted a trial of payWave payments using mobile phones with ANZ rival NAB and Telstra in August 2007.

Although the trial was proclaimed a success it did not lead to a commercial deployment of the capability.

One thing that has held mobile phones back from becoming “virtual wallets” has been lack of handsets capable of supporting the enabling technology, known as near field communications (NFC).

That was changing with handsets from Samsung and Apple’s future iPhone both offering NFC support.

However, the DeviceFidelity case would mean ANZ and Visa would be able to roll out mobile payments to existing iPhone users - as long as they were happy to use the new casing.

Visa Australia country manager Vipin Kalra said that virtual wallets were “in the future but that’s definitely where we’re headed”.

iTnews reported earlier this week that telcos were also re-examining their options around NFC and micropayments.

However, it appeared such applications would be provided over the top (OTT) of telecommunications networks and not involve carriers directly.