When the ANZ Banking Group embarked on new ways of working around two years ago, it probably didn’t model for 95 percent of its non-branch workforce working from home and its data analytics team painting what an economy in almost total lockdown looked like.

But on Thursday, as chief executive Shayne Elliott doled out bad news by the bucket, he credited the bank’s sometimes questioned all-in conversion to Agile with the “quick and safe adaptation of policies, resources and processes” that have allowed ANZ to pivot during the crisis.

“The principles of Agile – testing and learning, collaboration, shifting resources quickly – and a relentless focus on customer outcomes have enabled us to quickly adapt to the new environment with productivity benefits and minimal disruption,” Elliott said.

That’s where the niceties ended and what was soon to become one of the most fiery investor calls since the GFC began.

In the midst of an economic meltdown, with ANZ’s interim dividend axed in its entirety and an emaciated interim cash profit of $1.4 billion, a 60 percent slump, the bank quietly promoted its respected chief data officer Emma Gray to executive committee level as investors bayed for cold, hard data.

The move to salt away the dividend and substantially boost the ANZ’s already heavy data smarts means it could emerge as the leanest, most agile and fully digitised big four institution despite still running the Hogan core banking system that is also used by Westpac and Suncorp, the latter of which has struggled to migrate off it.

The appointment of Gray, who ANZ lured from Woolworths, speaks volumes to Elliott and the ANZ board’s technology vision for the bank, and the urgent need to get real-time information from a range of sources to detect movements in the economy and ANZ’s customer base and loan book. 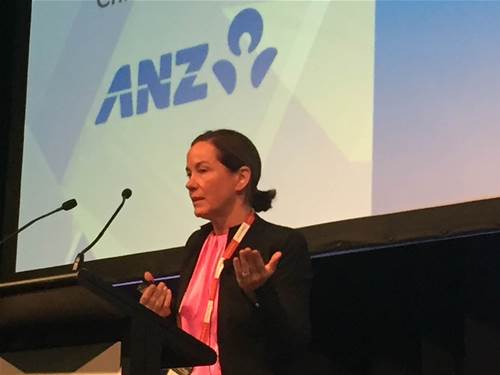 It’s a clear signal that while Lego serious play and the halo-effect of Atlassianesque culture shifts are great to gain soft headlines and competitive advantage during the good times, when you’re literally fighting for survival it’s cold clear numbers and solid data that counts, especially when keeping investors on side.

Put simply, bad data plus bad debt spells an even bloodier horror show for banks than the current COVID-19 crisis alone because it can affect how capital provisions are made and communicated to the market. For banks, bad data in a crisis can kill you.

Elliott knows this and in appointing Gray he’s heavily hedging against it.

Not shooting the messenger

The big worry for all banks is credit stress and distress in home loans (as well as business loans) that flows from the economy being put on hold, with data around that being essential fuel for modelling and wargaming different scenarios and stress tests.

Gray’s job will be coming up with and crunching those numbers, insights, cohorts and behaviours alongside chief information officer Gerard Florian and the chief of ANZ’s digital bank and former local Google chief Maile Carnegie.

And on Thursday’s analyst call it was a baptism of fire.

As expected, analysts demanded ANZ demonstrate how its models were derived, repeatedly drilling Elliott and chief financial officer Michelle Jablko at length over scenarios and how they were arrived at. It didn’t take long for things to boil over.

“We are prepared operationally,” Elliott insisted, before copping multiple rounds of flak for how its balance sheet on collective credit provisions was modelled and expressed.

“The stuff on slide 23 is clearly inadequate,” roasted Brian Johnson of investment bank Jeffries, before, as he is prone, extrapolating the data he felt needed to be there in the first place.

“Correct me if I am wrong,” he challenged.

“When I actually have a look in the slide I can't see what the downside scenario is,” Johnson said, adding “that's something that really you should be putting out there”.

“This is a critical piece of information. Can you tell us, what are the numbers?” Johnson contested.

“What is the hundred percent downside impact on the core equity tier one,” he pressed on.

“We are not disclosing that,” Elliott conceded, with Johnson offering that the bank would be “asked a lot about it this afternoon” when it fronted institutional investors.

“It's a fair question, I'm not dismissive of it but on this call right now, we're not going to answer it,” Elliott said of the elusive data point before unloading what data the bank did know and was willing to share.

“I think the base case scenario here, Brian, is pretty grim,” Elliott retorted. “I mean, let's just put it into perspective here.”

“It sounds very dismissive to say a base case sounds like, you know, happy days, it is not,” Elliott pushed back before running through the modelling of “13 percent collapse in GDP” and possible 13 percent unemployment to demonstrate the bank was not being too optimistic.

Then came questions about whether house price declines were too soft.

“I understand that, don't get me wrong, I understand … you'd all love us to give you the maths and how it all reconciles. We are concerned that that in itself could actually be misleading and confusing,” Elliott defended.

“We will give it serious thought about whether we need to add some disclosure to that.”

“The effective use of data, insights and automation will be a key in preparing the bank for the future, particularly as we respond to the challenges presented by COVID-19,” Elliott said in announcing Gray’s appointment on Thursday.

Her new position takes effect from May 1, less than 24 hours after it hit the market, with Gray reporting to Maile Carnegie, Group Executive Digital and Australia Transformation.

The role is a new one and Elliott said it recognised “the critical role of data, insights and automation has in the continued digital transformation of ANZ.”

“The effective use of data, insights and automation will be a key in preparing the bank for the future, particularly as we respond to the challenges presented by COVID-19,” Elliott said.

“Gray has led the bank’s data strategy, including how data is defined, gathered, managed and protected,” ANZ said in its results announcement.

“Gray will continue to lead the transformation of the strategic use of data, as well as creating new customer insights and driving automation to ultimately improve customer experience.”

The other thing Gray brings to the executive team is a solid head for retail and grocery, a sector that feels everyday how the economy is or isn't performing, and where consumer is headed, especially after running not just Woolies' data but its loyalty division as well.

If anyone would know what to do with hoarded frequent flyer points consumers are now stuck with, it would be her.

While technology suppliers to ANZ will no doubt be wondering who ultimately signs-off on tech and software purchasing – having three group executives overseeing the technology can be both a blessing or a curse – it’s also a firm indication of what Elliott attributes value to in a crisis.

Unlike the Commonwealth Bank, Westpac and NAB, the ANZ has escaped the heavy regulatory hits meted out by the Royal Commission and AUSTRAC, even if its early Agile push put a dent in the rate at which it was signing mortgages, prompting Elliott to hit the pause button.

In hindsight, that must look like a somewhat fortuitous mishap given the distressed state of the credit market.

Having joined ANZ during the GFC, Elliott however is not the kind of banker that likes things to break when moving quickly.

There’s no doubt ANZ 'gets' Agile. Now it has got wonk too, and with hardheads like Brian Johnson not taking motherhood for an answer, it's a prudent thing to have too.