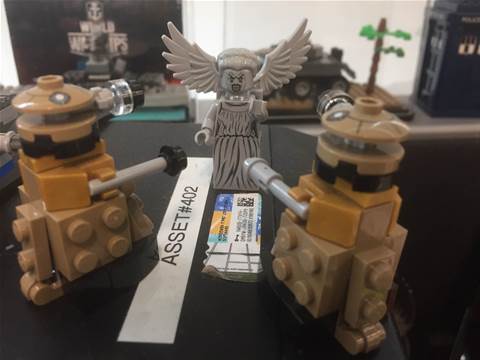 Forget the hype around the hundreds of millions invested in start-up hubs and incubators by Australian banks.

If you want serious nerd cred, LEGO is where it's at. Just ask ANZ.

In a sign of just how essential it’s become for major corporates to be hip to rapid development and agile, the Melbourne-headquartered bank is shouting the success of its new LEGO Serious Play (LSP) workshops as part of its broader cultural shift.

The goal? In the case of students and ANZ staff, it’s coming up with a common vision and purpose for their coursework – and working together. The stuff everyone struggles with.

The kind that enables cross disciplinary or business line teams to interact and generate agreement and understanding of differences without the usual corporate tick-box baggage of meetings.

"For my first session the challenge was a new team of uni students joining a small team at ANZ on their first day, who did not know each other well. They were about to embark on a two week assignment together,” McManus told ANZ’s Bluenotes corporate content play.

(For anyone sceptical of the bank's commitment to the brick, the ANZ’s thematically dedicated post leaves no doubts.)

“I could see the power and potential of LSP - from being able to break open the typical meeting or problem solving workshop – to applying LSP to Agile ceremonies and New Ways of Working (eg: Retrospectives),” McManus said.

“We started with a round table of introductions which were a little awkward and had me a feeling apprehensive about how the session would proceed. The students were nervous, shy and softly spoken, so I wasn’t sure how the next steps would go.”

McManus observed that “to get the team around the LSP concept” he kicked off the session with a short video from PAUSE Fest featuring his “LSP trainer and mentor” Michael Fearne “to explain why the method is so powerful followed by a quick overview of how the process works (Question, Build, Share and Capture).”

While true believers in Powerpoint, Excel and other death-by-deck formats might sneer and snigger at the notion of big banks hiring Lego gurus, Fearne’s core point is that corporate meeting orthodoxy too often squashes collaborative minds and productive ideas.

That’s because meetings are usually dominated by analytical extroverts.

To counteract that bias and engage and include people – especially the two thirds quiet majority Fearne reckons are introverts or those who thrive on visual or kinaesthetic cues – the bricks come out.

Once a quick methodology induction is away, McManus says it’s “onto the fun stuff”.

“A quick reminder to think in story and metaphor, as well as to “just build” instead of sitting, thinking, pondering and planning. Just start to build and the ideas will start to materialise in your hands!"

In blunt terms, that means people temporarily forgetting corporate convention and zoning-out on the bricks for a while as they try to assemble new approaches and disassemble what doesn’t work.

ANZ is far from the only local corporate using LSP, with Fearne’s client brag book featuring the likes of Google, Telstra, Australia Post, the Victorian government and infrastructure heavyweight Aurecon as well as KPMG and EY.

Fearne explains on his website that the real value of LSP is about initiating new ways of communicating and problem solving rather than adhering to lower risk corporate norms like doing things quicker or cost cutting.

“What I do takes more time, costs more money and there is a greater risk of failure than going with a standard managerial, command and control approach,” Fearne says.

“But here’s the key insight, these companies are willing to invest the extra time and money for the ability to look at the problem differently. And to open up a path to a different solution. That’s why they win.”

The biggest winner, of course, is LEGO itself.

The Danish brick maker now runs a dedicated product line of corporate kits that make the prices of Star Wars or Dr Who franchises look like stellar value for money.

Even though LEGO officially open sourced the LSP learning concept in 2010, it’s doing a fine trade in special corporate branded brick packs that save agile consultants from slumming it with demanding kids in the toy section of Kmart.

A single SERIOUS PLAY® (yep, it’s been trademarked) “Identity and Landscape Kit” comes in at $849.99, while a “Connections Kit” (yes, LEGO has an integration layer) is $799. That, the Danish company says, gets you enough bricks to keep 10-12 people occupied for one to two day workshops.

For those wanting to see what all the fuss is about, or maybe give their boss a hint, there’s a starter kit priced at $38 (214 pieces) which contains a “selection of special elements such as wheels, tires, windows, trees, mini figure parts, tubes, globes and small base plates”.

As for not leaving the sharpest, hardest bricks out for barefoot parents to excruciatingly step on in the middle of the night … well, that’s a life-long workshop.