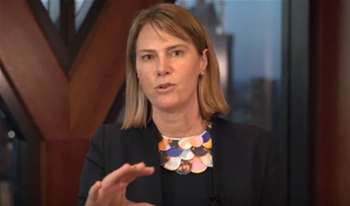 The head of ANZ’s digital banking division, former local Google chief Maile Carnegie, has taken to YouTube to pour petrol on the robots vs humans debate, declaring that application of artificial intelligence will determine the winners and losers in financial services.

In a post unambiguously titled “AI: are humans obsolete” Carnegie said that ANZ is taking challenges and opportunities posed by AI “incredibly seriously”, adding that “it’s going to be the platform that fundamentally drives differentiation between more and less successful financial services firms in the future.”

The video, which also features ANZ chief economist Richard Yetsenga and investment fund Airtree Ventures co-founder Daniel Petre, is the latest effort in a concerted push between banks to position themselves as ready to tackle an AI-led onslaught primed to automate out service jobs like financial advisors (if the Royal Commission  doesn’t eliminate them first).

Carnegie talks-up the pace at which AI will hit the economy which last week posted another set of solid jobs growth numbers.

“One of the things that is hard for people, including me quite frankly, to understand is the compression in innovation cycles.

“So it feels like people are just kind of getting things like mobile under control, cloud under control and so it’s actually somewhat hard to face into the fact that now that AI is going to be the new differentiator between businesses that are going to be successful and those that aren’t.”

One of the drivers for the AI arms race between banks is the looming open banking regime that will allow transactional, account and repayment data to be shunted between institutions by customers looking for a better deal.

Open banking will also open a window onto customer information that was previously tightly held by institutions, allowing them more opportunistically create and price products to seize market share and boost profitability eroded by the regulatory crackdown on fee gouging and trailing commissions.

But it’s not all good news in ANZ’s latest video, with local venture capitalist Daniel Petre calling out a profound split in the labour market – both in terms of pay and skills – that he believes will remove the middle ground.

“You will have an employment issue,” Petre warns.

“We are seeing the beginnings of it now, this massive bifurcation between very highly paid  - let’s use data scientists as the proxy – and then aged care workers.

“And a lot of this middle ground held by professionals tends to disappear. “

Petre goes on to caution that while previous major technology-driven shifts – like the agricultural and industrial revolutions – played out over decades enabling people and economies to adjust, that’s not happening now.

“The reality is that this is happening in a much faster time. Society will not have the time to naturally evolve to this new bifurcation. So I think we will see quite a lot of disruption before we get to a new state or a new end state,” Petre said.

ANZ’s chief economist Richard Yetsenga is hoping his own job at the top of the dark artistry tree will be there when the revolution comes.