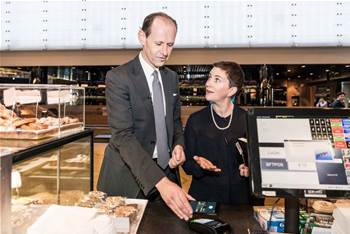 But what does it mean for ANZ's proprietary mobile wallet?

ANZ Bank has for the second time become the first bank in Australia to jump onboard a new mobile payments platform, following up its debut of Apple Pay in April with competing platform Android Pay.

From today, ANZ Bank Visa credit and debit and American Express credit card holders can use Android Pay at around 800,000 contactless payments terminals across the country.

“Given Android is the most popular smartphone operating system in Australia, we know today’s announcement will be well received by both our retail and merchant customers,” ANZ Bank CEO Shayne Elliott said.

ANZ was one of five major Australian banks to sign up to Android Pay last December ahead of its scheduled launch this year.

Macquarie Bank, Cuscal, MyState and Teachers Mutual Bank were among a number of financial institutions to today follow ANZ to announce support for the platform.

Other initial launch partners - including ING Direct and Westpac and its subsidiaries - said they would bring the platform to their customers later this year.

Google has provided a full list of the 28 banks that will support Android Pay, either from today or imminently.

Android Pay is currently supported by American Express and Visa, and Google last year said it was working with Eftpos on similar support.

Google today said MasterCard would come into market with Android Pay with a number of banks within a few days.

Retailers who accept contactless payments will be able to process Android Pay transactions.

A group of retailers including  7-Eleven, Coles, Crust Gourmet Pizza, Domino's, Donut King, Gloria Jean's, McDonalds, Telstra and Michel's Patisserie have signed up to the platform.

Android Pay will be available to those with smartphones running the KitKat operating system and above, which also contain near-field communications (NFC) capability.

The long development time was predominantly a result of the bank being unable to find a tokenisation solution that could provide the stability and security ANZ was after.

It meant Mobile Pay was the last entrant into the mobile wallet space out of the big four banks; Westpac, NAB and CBA have offered similar products to customers for several years.

Now, after launching just six months ago, Mobile Pay will need to prove its viability as a third-party payments application when customers have the ability to use a platform native to their device with Android Pay.

"[It's] about choice. We have customers who are passionate about and want to have a bank-branded wallet because that gives them a sense of security, and then we have others who feel totally secure and love their devices," Elliot said.

Elliot said there was a market for the proprietary Mobile Pay wallet and that would "continue to be the case".

"People are complex, and have different needs and views about things. I don't know that there's a right or wrong answer," he said.

"We live in an open architecture kind of world, and there'll be multiple solutions, and that's a good thing. We passionately believe in choice."