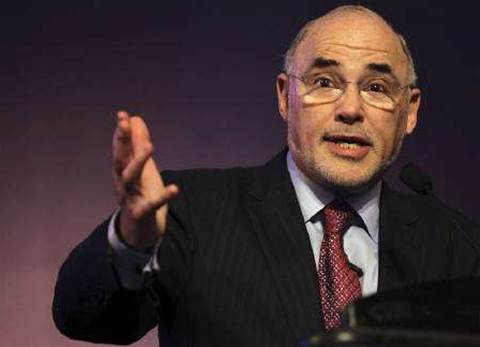 Leader wins praise for dumping TouchPad... and not much else.

Leo Apotheker's credibility as a CEO is falling along with Hewlett-Packard's stock price.

Apotheker, who gained a reputation for sharp business acumen when he headed up SAP, thoroughly flummoxed HP shareholders last week with what some analysts have called a "value destroying" $US11.7 billion deal to buy British software maker Autonomy and for sticking a for-sale sign on HP's PC division -- thus scaring off clients for the year or so it will take to decide on the division's future.

In a resounding rejection of Apotheker's grand vision, shareholders sent HP shares down almost 20 percent on Friday, wiping out $US16 billion of value in the worst single-day fall since the Black Monday stock market crash of October 1987.

Since Apotheker joined HP early last November, the company has lost almost 44 percent of its value, and he has lost a significant amount of investor support.

"We wonder whether activist investors will -- and should -- begin to exert pressure on the board," said Toni Sacconaghi, an analyst with Sanford Bernstein.

"If HP's results don't improve, the company will ultimately restructure its portfolio and/or replace its leadership."

"Every time he has gotten on the call, the stock has gone down substantially," Becker said.

On a conference call last Thursday following the announcements on Autonomy and the PC division, Apotheker failed to fully address key questions from analysts, including why HP was paying a large premium for Autonomy.

When asked about the vision for HP's PC unit, he said the decision could range from an outright sale to a spinoff to a "potential "nontransaction."

"That call -- was that an 'A' performance by a CEO on that acquisition?" asked Becker.

An HP spokesman said the "strategic transformation" is intended to position the company for a new future and drive long-term shareholder value.

While investors applaud Apotheker's long-term plan to get out of HP's commoditised PC business, and the Palm WebOS tablet and smartphone business -- considered a capital sinkhole -- that goes with it, the $US11.7 billion bill for Autonomy and haphazard articulation of the spin-off strategy left many shaking their heads.

HP's purchase price is a stunningly rich 10 times sales of Autonomy, a cloud search specialist whose revenues are equal to only about 1 percent of HP's.

HP's Personal Systems Group, which includes the PC business and the now-defunct TouchPad tablet -- faces an uncertain future, which may undermine the business and benefit Dell, whose shares ended up nearly 2 percent on Friday in a broadly weak market.

Executives as recently as May had touted how WebOS would be on every HP product from printers to PCs.

In March, they had played up the advantages of serving both consumers and enterprise.

In addition, Apotheker has been forced to slash HP's sales estimates three times since he took over last November.

It is not the first time HP seems behind the curve. it agreed to buy Compaq in 2001 in what turned out to be a rocky merger.

IBM, on the other hand, transformed itself by selling its PC arm to China's Lenovo in late 2004 and establishing its dominance in enterprise IT.

HP appears to be trying to replicate Big Blue's success.

Some analysts and fund managers hold out hope that the company is at least now on the right track and can still catch up by making smart acquisitions.

"Just because they didn't make the move earlier doesn't mean they still can't skate to the where the puck is going," said Tony Ursillo, an analyst with Loomis Sayles Value Fund.

But he added, "HP has overpaid for every acquisition it has made" in the past year.

One thing that could take the sting out of the steep price tag for Autonomy is the sale of HP's PC division, which industry experts estimate could fetch as much as $US10 billion.

And Apotheker did make at least one correct decision by retiring the TouchPad. Sacconaghi estimates the business lost about $US250 million last quarter, or 9 cents a share.

But the events of last Thursday have done little to build confidence in Apotheker.

The afternoon of high drama kicked off with a series of rapid-fire announcements: disclosure of acquisition talks with Autonomy; confirmation a deal had been done; announcement that HP was killing its TouchPad and other WebOS devices.

HP also disclosed its results an hour earlier than scheduled, marking the second straight quarter that the company had to release earnings ahead of schedule.

And in another small sign of disarray, TouchPad ads featuring "Glee" star Lea Michele continued to run on CNBC on Friday.

While HP's dire competitive position was in the making well before Apotheker's arrival, shareholders do not view the CEO's track record as impressive.

"I was skeptical coming in about whether he had the right background for the job," Ursillo said. "So far the results are not encouraging."