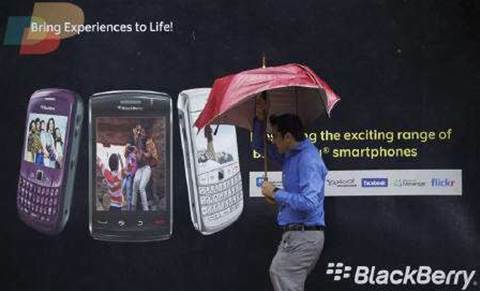 The BlackBerry, once ubiquitous in business, faces deep challenges in that market as more companies allow employees to pick their own smartphones and add third-party security applications.

One of the BlackBerry's main selling points has been Research in Motion's top-tier security and management features, which appeal to IT managers eager to control what workers do with corporate information and protect business systems from cyber attacks.

But with companies such as Good Technology and MobileIron offering applications that could untether IT managers from their BlackBerrys, analysts say that consumer-market pressures could intrude into RIM's mainstay corporate market.

Only two of nine major US companies contacted by Reuters said they exclusively use the BlackBerry, namely Boeing and Exxon Mobil.

The remaining seven -- Alcoa, Caterpillar, DuPont, Kraft Foods, PepsiCo, Microsoft and Verizon Communications -- support at least one other brand, such as Apple's iPhone or phones that run Google's Android or Microsoft Windows.

"I would say their enterprise base has been besieged really, first by Apple, then by Android," John Jackson, a mobile device analyst at CCS Insight, said of RIM.

RIM's share of the US smartphone market stood at 25 percent in April, down from 35 percent in October last year, pushing BlackBerry to third place from first place in the market, according to research firm comScore.

Most of RIM's problems, analysts say, can be traced to their delay in rolling out new phones to compete with the iPhone or Android phones sold by Samsung, HTC and Motorola.

Chemical company DuPont, which has 67,000 employees, started to give some workers the option to use the iPhone in the fourth quarter of last year. In a few months, iPhones grew to about a quarter of Dupont's smartphones, according to Eric Smith, a telecommunications manager at the company.

"The technology that people have available in their personal and daily lives, they want to use at work. People had their own iPhones and iPads, and they said, 'Hey, why can't we use these for work?'" said Smith.

RIM shares are down 60 percent from their year high, and dropped sharply in mid-June when it released dismal quarterly results and postponed a new operating system and touchscreen version of the Bold phone aimed at companies.

These delays pile pressure on IT managers to support additional phone platforms, which can be costly -- or risk security breaches if they say no and employees use their own phones anyway for company matters.

To help IT managers, there is a growing number of third-party security options, such as email encryption and technology, that allow IT managers to remotely control data on personal phones. For example, they can wipe corporate data from lost or virus-infected phones.

As employees get more choices, they take on more responsibility for security, said Bob Tinker, CEO of MobileIron, which raised $20 million in a fourth round of private funding in May.

"It's much more of an adult model, where you're given the latitude to do what you need to do, but if you cross the boundary, there are consequences," Tinker said.

The influence IT managers have over phone selection is shrinking. Company-bought smartphones fell to 7 percent of the market in 2010 from 15 percent in 2009, according to research and accounting firm Strategy Analytics.

Neil Mawston, a London-based analyst at Strategy Analytics, calls the trend consumerisation. "BlackBerry has really been the one that's been hit really hard by that trend," he said.

Another survey by research firm Yankee Group found that 55 percent of IT managers cited RIM as their preferred operating system, but that fell to 34 percent when they were asked what they will prefer in two years.

Boeing has not found a security option that it trusts other than BlackBerry, said the aircraft maker's spokesman Kenn Johnson, adding that it was feeling pressure to allow more phone choices. "We always know there's a desire for that cool aspect, but it can't be at the fault of security," he said.

Jackson, the mobile analyst at CCS Insight, said it was imperative for RIM to develop more exciting phones.

"Unless you can outsex Apple, you're going to have a problem," he said.