AMP Bank is the latest to add Apple Pay 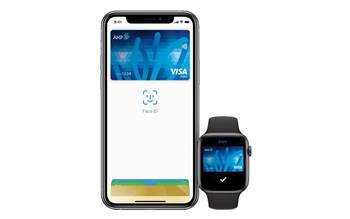 AMP Bank on Wednesday became the latest Australian financial institution to offer its clients the ability to use Apple Pay.

The bank’s managing director, Rod Finch, said in a statement the move is about increasing the convenience and choices that customers have around payment options.

“Giving our clients a fast, easy and secure way of paying for goods and services, without needing to handle anything other than their personal smart device, has never been more important, especially during these extraordinary times,” Finch said.

AMP touted the move as a safer, more secure and private way for customers to pay compared to plastic cards, thanks to added authentication features like Apple’s Face ID and Touch ID, as well as unique security codes that are generated for each transaction.

The bank also offers clients the choice of Samsung Pay and Google Pay which were introduced in mid-2018.

ME Bank and Heritage Bank similarly cited the rise of contactless payments - which are viewed as being more hygienic during the COVID-19 pandemic - as one of the key reasons why they introduced Apple Pay earlier this month.

While the move to contactless payments is an improvement for customer convenience and potentially health, the transition has hit retailers’ profit margins as ‘tap and go’ payments are typically routed through more expensive payments networks.

However, that could be set to change with the federal government and Reserve Bank of Australia (RBA) now voicing their support for merchants to be able to choose which payment network is used - known as least-cost routing - to process contactless payments.

RBA assistant governor, Michele Bullock, said during a recent keynote address at a Morgan Stanley webinar that least-cost routing is increasingly giving merchants more power to choose cheaper networks such as the one run by eftpos.

“But while least-cost routing has been available for a couple of years, it has not been widely promoted by the major banks which account for most of the acquiring market in Australia,” Bullock said.

“So with many customers switching to contactless in response to COVID-19, some merchants are finding their payment costs rise as debit card payments are automatically routed through the international schemes.

“It is therefore important that merchants be given the option of least-cost routing.”