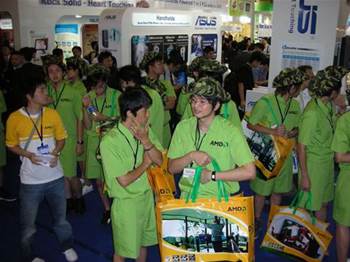 AMD has said it is bringing forward the deployment of its Shanghai server processors to the end of this year.

The new processors had been due for release in the first quarter of next year, but the company has said that progress has been faster than expected and they will now ship in volume in the last quarter of this year.

The company is still recovering from problems with its previous server processor, Barcelona, after a flaw was found in the chip's cache memory.

The flaw caused delays of up to six months and lost AMD market share against rival Intel.

"With Shanghai we had to turn out a product early that had stability and health so that partners got engaged early," Patrick Patia, AMD's general manager of servers and workstations, told vnunet.com

"We had experience from Barcelona that wasn't ideal. To win hearts and minds we had to do something special with the new chip."

The first processor, a 75 watt general unit, will ship by the end of the year, he said.

In the first quarter of next year a 55 watt version for cloud computing functions and blade servers will be released, as well as a 105 watt version for "pure performance servers", a sector Patia described as "niche".

The company is also planning 32 and 22 nanometre processors in the future.

To repair relations the company will be setting up full systems for partner testing so that the investment needed to test the new chips is minimised for customers.

It is also getting the new chips to OEM partners early so that they can have systems ready as soon as possible.

After the Barcelona problems, the company brought in engineer Raghuram Tupuri to analyse the entire process and identify where problems were occurring.

The company claims the results have been excellent and the first Shanghai processors being built in AMD’s Fab 36 in Dresden have shown lower than expected fault rates.

The company will also be releasing a new chipset for the Shanghai chips in the second half of 2009, only the second time it has ever done so.

The new platform, dubbed Fiorano, will be socket compatible with the Barcelona chips and will include virtualised I/O and AMD's Hypertransport 3 technology for faster speeds and better virtualisation support.

"We've been leading virtualisation benchmarks for some time," said Patia.

"It's in our DNA that when we do silicon design we think about virtualisation. We've heard loud and clear and it's an important market to focus on."

Looking further ahead, the company is planning a six-core processor dubbed Istanbul in the second half of next year, which will also be compatible with the Fiorano platform.

"We will have products for the two, four and eight socket space, with the same socket, same platform and same frequency," said Patia. "Our competitor still has different features and different products for each system."

Got a news tip for our journalists? Share it with us anonymously here.
Copyright ©v3.co.uk
Tags:
barcelonachipscompanyhardwareprocessorprocessorsshanghai