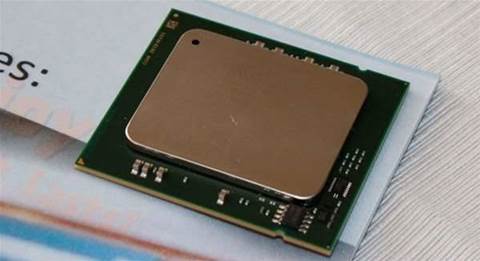 Launching the processor with server partners SGI, Fujitsu, NEC, Cisco, Dell and IBM, Intel said the 7500 has the RISC market in its sights, as forecast by analysts.

Intel said it is more appealing that its rivals because, as a member of the x86 family, it powers Windows and Linux machines.

AMD's Opteron 6000 series, codenamed "Magny Cours", was launched yesterday to the press at an event in Sydney, with the company also announcing Acer as a new server partner.

AMD said the processors offered up to twice the performance of its older, six-core line, up to 2.5-times the memory (four channels of DDR) and half as many more DIMM memory slots.

Newly-installed AMD country manager Brian Slattery said servers based on the processor would be popular among organisations looking to consolidate on to fewer physical machines using virtualisation. The processors would also serve data-intensive applications, he said.

"If [a customer] is looking at something like data mining, they're going to do very well with the 12-core CPUs."

Slattery said AMD would counter the louder buzz around Intel's EX Nehalem by pointing out where Intel was following AMD's lead.

"There has been a lot of buzz around Nehalem and it's always interesting to me that a lot of the features Intel was touting as revolutionary were things that we were doing back in 2003 with the original launch of Opteron," Slattery said.

"We've had our direct connect architecture for a several years now, we've had embedded memory controller for several years now. But now with [Intel's] marketing engine behind it, they have been able to get a lot of press."

Slattery said Intel's Nehalem EX was a "strong product" but AMD's 6000 series was "the best product AMD has launched to market in years".

How and why to backup your Office 365 tenant
By Sholto Macpherson
Negar Salek
Brett Winterford
Mar 31 2010
3:32PM