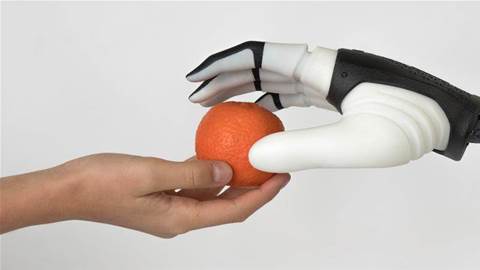 Because handing things over is surprisingly tricky.

Global e-commerce giant Amazon has awarded a US$70,000 research grant to roboticists at the Queensland University of Technology to continue there work improving machine’s ability to identify, pick up and manipulate everyday objects.

Amazon’s grant coincides with the publication of a separate study involving QUT researchers and the Australian Centre for Robotic Vision 9ARCV)on improving robot’s versatility and dexterity so they can operate in more real-world scenarios.

While most research in this field has so-far focused on picking up objects, the head of ARCV’s Manipulation and Vision program Dr Juergen Leitner said this latest project has instead looked at how robots might pass objects on or be handed objects.

The study analysed the behaviour of people when they have to grasp an object and when they need to hand it over to partner, investigating grasp choice and hand placement on those objects during a handover when subsequent tasks are performed by the receiver.

A variety of different objects were used, including pens, screwdrivers, a bottle and a toy monkey.

The research notes that passers tend to hold the “purposive” part of an object to leave a handle or grasp point unobstructed to the receiver.

This action intuitively allows humans to comfortable hand over and receive objects while allowing the receiver to then perform a task with that object, but Dr Valerio Ortenzi, one of the principal authors of the paper from the ARCV, said robots need to be taught these simple steps.

“We intended to shed a light on the behaviour of humans while interacting in a common manipulation task and a handover is a perfect example where little adjustments are performed to best achieve the shared goal to safely pass an object from one person to the other,” Ortenzi said.