Amazon loses US$10 on each tablet it sells 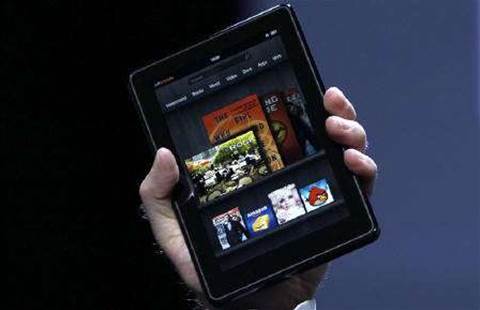 Amazon.com's new tablet computer costs $US209.63 to make, IHS iSuppli estimated on Friday, but will sell for $US199, highlighting how the e-commerce company is taking a financial hit upfront to get the device into as many hands as possible.

The launch sparked concern about a price war at the lower end of the tablet market, currently dominated by devices running on Google's Android operating system from companies such as Samsung Electronics, Motorola Mobility and HTC.

IHS iSuppli said the components that go into the Kindle Fire cost $US191.65. Additional manufacturing expenses bring the total cost to $US209.63.

Based on IHS iSuppli's estimates, the company may lose just under $US10 on each Fire it sells.

An Amazon spokesman did not comment on IHS's estimates on Friday afternoon.

Since the Fire was unveiled on Wednesday, investors and analysts have speculated Amazon may be selling the device at cost or a loss.

The IHS report is one of the first efforts to put meat on the bones of such speculation.

Gene Munster, an analyst at PiperJaffray, estimated earlier this week that Amazon would lose roughly $US50 on each Kindle Fire sale.

Amazon is hoping the device encourages users to buy more products and services from the company, making up for the upfront losses, according to Wayne Lam, an analyst at IHS iSuppli.

This is a version of the "razor-blade" model in which Procter & Gamble unit Gillette sells razors at a loss and makes up the difference from profitable sales of blades later, Lam explained.

In Amazon's case, the Kindle Fire will stimulate demand for the company's digital content and boost sales of physical goods on its e-commerce websites, according to IHS iSuppli.

"When further costs outside of materials and manufacturing are added in -- and the $US199 price of the tablet is factored along with the expected sales of digital content per device -- Amazon is likely to generate a marginal profit of $US10 on each Kindle Fire sold," the research firm added.

Kindle Fire users are unlikely to buy a lot more of Amazon's digital music and video with their new device, Crupnick added.

"How long will it take for consumers to get on board with the total tablet entertainment experience?" he said. "I'm cautious."

Even on the successful iPad, users do not download a lot more music and video, Crupnick noted.

So far, tablets are mostly used to access video games such as Angry Birds and for downloading other apps -- and that is where Amazon has the best chance to recoup some of its upfront losses on the Fire, he added.